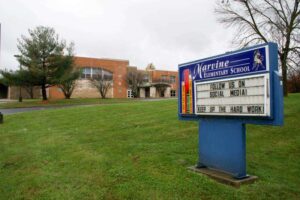 My task was to warm the kids up, and had fun with Tutti Tah, even though the oldest 5th grade girl, new to the class, wondered what was going on. Anyway, the kids were great.

We hoped to revisit our vocabulary list, which Bill did, but, as we figured out later, perhaps, because of lack of information and the reticence of answering questions in class, we didn’t get much out of the kids. 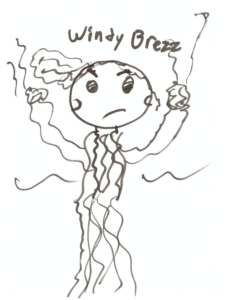 I did an exercise with rhythm instruments after dividing the class in two. Amazing that some of the kids had a problem with counting off in twos. (occasional “three”). What worked – we were able to break up the little click of 5th grade girls and spread the kids out. After getting each side to play a beat, and, importantly, our “big endings” (so much fun…), I had each side take one part of each line, with Bill leading the other side.

Makes a monster wild fire / That’s what I thought. 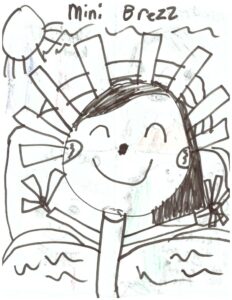 We pulled out wild fire, pollution, hurricane and drought and voted for wild fire and pollution. Since one young girl had already worked up the Wind Power Family, we went with that. Bill then divided up the groups into Wild Power, Wild Fire and Pollution, and introduced the idea of how that group could make costumes for themselves, and gave the kids paper and markers to ideate what that would look like.

As the session came to a close, we shared the pictures with the larger group. Time’s up.

As Katie, Bill and I put our heads together, we figured that the kids should start painting a small model of their project, water-color on cardboard, next week, in preparation for creating a full size, production model. I still have to figure out how to get verses for the three WP, WF and P models. We figured I could frontload the three verses with the first two lines and have the kids finish them.

One boy really relished “scientist”, so we figured that he could read the lyrics as a mad scientist while I play the chords, incorporating the “who dat? into the song. We only have three more sessions so the pressure’s on.

This is hard work.