The farmers’ markets are starting to roll in, and I had my first of the season on Thursday a block away from home at Farrington Square (formerly Campus Square). It was a grey and somewhat breezy day with temps in the upper 50’s, still a little chipper, but a good day, none the less. 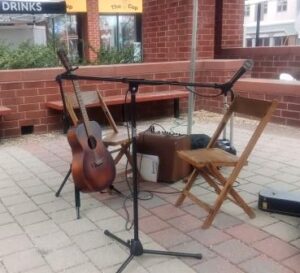 I set up my new combo vocal/guitar amp for the first time outdoors and I was mostly pleased with it, in spite of a few annoying barks when I overdrive my guitar playing. (What, me, bangin’ on the guitar?!) I also baptized it with a new dent when it tumbled off my wagon at the end. Oh, well. All in all, a nice addition to my gear for some of these small gigs.

Being the first of the year for the market itself, there were new vendors among some of the old faces (Peanut Butter Man), lots of Lehigh coeds (what’s with the bare midriff theme? brrr…) and a few folks who knew who I was.

One particular coed came up and asked if I ever lived in CT. That was a surprise. She then asked if I had played the Atwood Library in Northford. Yes, that’s near where I used to live in Northford. She said she remembered me playing there as well as listening to my I Like Peanut Butter CD all the time. Amazing flashback. Cool.

The gig went quickly and I had a few verse conniptions, but that’s what these gigs are for, getting my repertoire up and running again.

It was good to be active again.