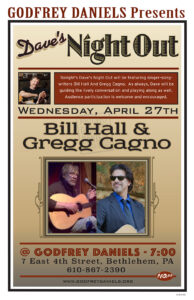 This was a flash-back to a DNO that we did four years ago, almost to the day, with my friends Bill Hall and Gregg Cagno. I started with Going Away from Utah Phillips and then passed off to Gregg. Early on, we talked about Jersey songwriters like them (I included John Gorka) who had access to the NYC folk scene and were able to head into the city to see the greats and play the open mikes, as well. As we rotated amongst the three of us, Gregg and Bill did some really fine original tunes. I was able to bring in my new arrangement of Imagine, Branching Out, Rodeo Rider (on 12-string), and my Lessons From Pete.

My friend and now Eastonite Andrew Dunn had chatted earlier.  I said how much I liked his Steel Is Strong song from the recent Bethlehem Steel album, and that I was playing it on my radio shows. He then said that it was based on my Lessons From Pete. I found that amusing, but, in playing it on stage tonight, I caught the reference. No wonder I liked it. Frankly, it was a honor to hear that.

Bill had come in early to do some recording for his Rosie Project and had worked with Gregg already. When I came down around 4:30, things were all set up for my session. I brought my SC-13E down for this one and rolled through my version of Rosie is a Friend of Mine. The Rosie Project plans on having a multitude of version of his song on one album, with the other album Bill’s other material. Since we all set up, Bill suggested I try out a few more tunes so I stepped up with Stan Rogers’ Giant, John Gorka’s Branching Out and Alex Bevan’s Rodeo Rider (on 12-string). Bill and Gregg filled in some vocals on Branching Out. Amazingly, I was able to roll right through the songs on the first take, though the process is pretty exhausting.

Bill bought Indian food from Na Wab down the street, and it served as a nice break between the recording session and the show.

As usual, there was a dearth of folks for the show, but the music and conversation was stimulating and humorous. It was good to be with these good friends.