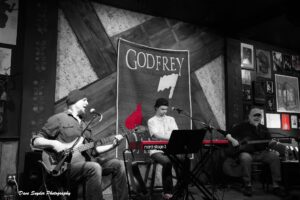 These Dave’s Night Outs were formed somewhat tongue-in-cheek back when I was gigging quite a bit. Well, not so much anymore as they are evenings when I actually get out of my apartment for some music with friends.

Tonight I got to play with Noah Gibney on his 15th birthday. Noah has been gigging with my good friend Kris Kehr in the Reading area, and is a wildly talented “old soul” kid who sings, plays and performs like someone twice his age (and unlike some folks I know, never get around to). Noah plays piano and guitar, writes some of his own material and, most importantly, listens before he plays. 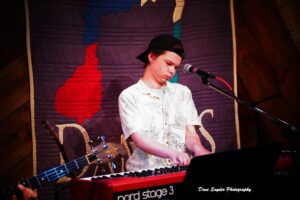 Kris had told me that his instincts are off the chart and I could trust that he could pick up on songs on the spot. So, I had every confidence that I could throw stuff at him and he would respond. He did. Towards the end, I did Stan Rogers’ Giant at him, pretty much in a different tradition, and he added some great sound to the song. He was also open to improvisational techniques that I plopped in front of his ears. (Kris, of course, knows to expect that from me) He started off with a great (though long) version of Stormy Monday. Later on, we did several rondos where we passed leads among the three of us, just like old pros, unspoken on stage.

As usual, there were very few folks in the audience, but the conversations were quite interesting, talking about bridges in songs, and other musical esoterica.

It was Noah’s 15th Birthday. Amazing. I love these nights.