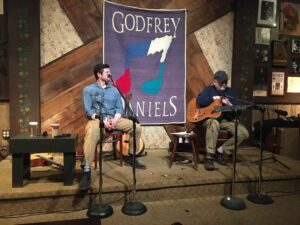 I’ve been lucky to present some of my friends who are quite talented songwriters, and Wednesday’s guest, Alex Radus, is no different. I’ve been an Alex fan-boy for several years now. His new album, recorded at Godfrey’s, is called Tributaries, and that was a good point to start from.

I took it as river-like tributaries that have shaped our music but he also mentioned that tribute is part of that equation. Spot on.

I started out with a Mississippi John Hurt as one of my early influences, especially with his two-finger picking. I did CC Rider, although rather sloppily. Alex picked up on that did some fine fingerpicking with one of his tunes. As we moved through the night, the mix of styles and songs was quite entertaining.

I ended up doing Barnyard Dance on my arch-top Martin, my Fountain Hill tune I Can Be… and Take Me To The River. We talked about how our instruments often shape what we play or write songs.

Again, a small audience that included my daughter Rosalie, so that’s pretty good. The conversation was stimulating and Alex’s songs were wonderful. He was a delight to have on stage with me.