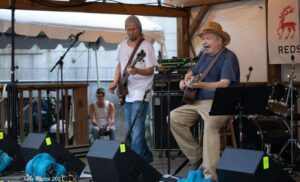 This is my umpteenth Musikfest in a row (since the beginning) and, as always, it remains a touchstone for me as I crawl through each year. The set usually defines the material I’m comfortable during the year and I had the time to play and comment on the things I’ve be concentrating on for the last, very strange, year. 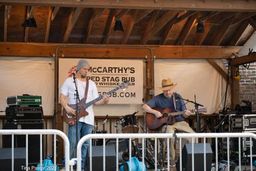 As usual, I could depend on my good friend, Kris Kehr, to follow me through my material, a credit to his work before hand on the material, and, especially, the on-the-spot improvisations on my improvisations. Kris cares.

I wasn’t expecting kids to be there, so I had put together a fairly adult set. But, early on, two factors happened and one fed the other. My good friend Pat Richard was there; a woman who lives to dance – and she even comes to my shows! Also, some young girls were there and looked like they needed to be part of the action. So, I invited the three or four girls to come up, and Pat was already dancing to my tunes. They connected and it became a show unto itself. I love to channel the energy back to the audience, and they pick up on it. Cool.

Early on, I talked about my gig at Camp Happiness last week and about the dance The Car Dealership. I got the audience up to do it, and it was hoot. A great moment.

Kris and I ran through Don’t Call Me Early, July (with some bragging), Blue Mule, Summertime Blues, Blue Mule, Giants, We Gave Names to the Animals (from Donegan), Welcome, Rosie, Giant, Vegetable Song, BoJangles, Legends, Lessons from Pete. Time’s up. 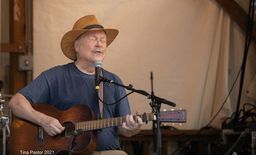 My very good and talented friend Bruce Gaston came up for his traditional guest set during my gig. As always, he knocked it outta da park with his manualism: Take Me Out to the Ball Game and Beer Barrel Polka. It really doesn’t matter what he plays. I simply love watching the audience while he rolls through his craft. It’s a gift to have him in my circle of players. 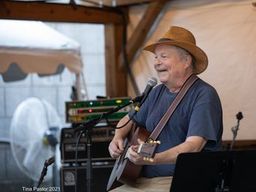 These Musikfest gigs are also some of the few times I get to play with a real sound system/crew. The experience on a sound stage is as enjoyable as playing for the audience. With monitors, a good guitar sound and vocals, the experience is similar to being in the studio. The connection with overall sound is delishious. Kris would agree and make the whole gig great for the both of us.

There was not a great turnout for my 5 pm set, though the audience was great. A mix of familiar faces, some kids, and the responce was quite gratifying. The heat index was over 100, humid and oppressive, and a Wednesday early evening. I’m somewhat under the radar again with the MF muckitymucks, and that’s okay. But, still, I would like to put together a full band again, in a prime time spot, for real pay. Those days are past.