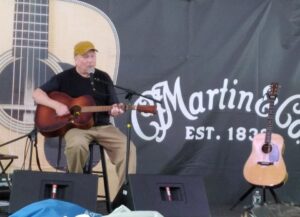 This is a freebee gig that I sign up to do, just to have a little more presence at Musikfest. It’s a 30-minute set in a large tent under the Hill-to-Hill bridge in the thick of the festival – Lagerplatz. Yes, beer.

On one end is a big trailer of beer and rows of taps of Yuengling and on the other end is MF merch so there’s stuff going on both ends. In the middle is the stage and tables and chairs with chatter and noise going on. It’s up to me to try to gain some semblance of a show while everything is going on. It’s a bar gig.

My friend Nick was on sound and he did a great job to get as much umph out of my Martin, but there’s only so much a solo guitarist can do. Still, I managed to chat, play strong and engage as best I could. Giants is always a good tune to do early in the set. Don’t Call Me Early, July, Giants, Giant, Rosie, Pay Bo Diddley, Lessons from Pete. It was good, but I found myself exhausted after only a half hour set, especially with my voice.

I treated myself to some Rita’s on the way home. I sold a couple of CD’s, ran into Tommy Crist from the old R&R band Pickens, and chatted with a couple of other fans. It wasn’t as hot as the last couple of days, but still I was drenched.

Off to TV-39 tomorrow morning for my big Kids’ Jam on television – no kids. It will present its own challenges.