Bill, Dave,, Rachel, Ben and Frank on the outdoor stage.

I was invited to be part of a musical celebration of my friend Bill Schachter’s life on Thursday. Held on the large outdoor stage in the parking lot of Touchstone Theater, I was joined on stage with Bill Hall, Rachel Schachter, Ben Wright and Frank Pappalardo, complete with good sound and lights. Ben was in charge and based the format on a Dave’s Night Out round robin.

Tables and chairs were set out with pizza, ice cream and surprisingly good weather for a summer night. Carol, Bill’s wife was in good and boisterous spirits and was the designated heckler for the evening, often chiming in with wonderful asides. Rachel and Bill did some wonderful songs and I added (We Are Welcomed, Branching Out, Giants (Bill S’s favorite one of mine) and Shoo That Fly. 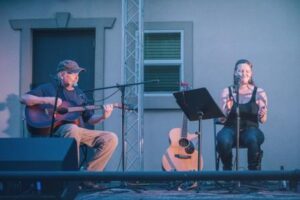 Folks remenisced about Bill’s quirky songwriting and Rachel, Ben and Frank talked about their times playing his music and his songs. It was quite moving.

We were invaded by some nasty flies as the sun set, and all of us were dealing with singing and playing while we dealt with this plague. So, when I played Shoo That Fly, the audience gladly stepped it up with the singing and the shooing. Funny how these moments literally come out of the ether for me.

We finished up with David Mallett’s Garden Song, which was a touchstone for Carol and Bill’s relationship so many years ago. Bill wrote some great verses to it as he wooed his future bride. 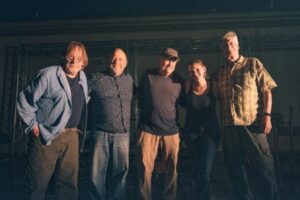 Ramona just stopped up to the apartment as I’m writing this and said that she hadn’t seen me smile so much in a long time. There ya go.