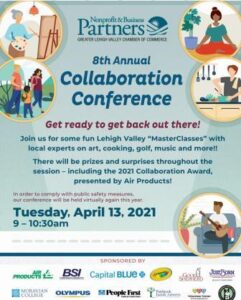 I had my first April gig today, part of a Chamber of Commerce Zoom conference. I was asked to lead a break-out session of music so I called it a hootenanny, a term that the corporate folks didn’t quite recognize when I brought it up. There ya go.

Fred from Working Dog Press hired me (he really is a wonderful supporter of me, Godfrey’s and the LV arts community at large) to work my magic and lead a sing-along. I appreciate his trust. These folks are community leaders working in various civic organizations, and this was an opportunity to bring my creative arts to them. I was among a chef, a golf instructor, a painter and a physical therapist.

I actually did something for this organization several years ago with a break-out songwriting session up at Zoellner Center, so I felt comfortable in working with these professionals.

I led off with Take Me Out to the Ball Game and followed with I Like Peanut Butter. I said that even if the sound was turned off on Zoom, I wanted to see them singing, the next best thing. I also wanted to see them move. I was able to sprinkle in my Pete Seeger observations about the power of singing together. I followed with My Girl, breaking the response into the three parts, and, again, insisting on Motown movements. It worked well. 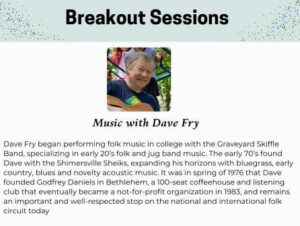 I experimented with Skip To My Lou. I gave them a prompt early in the session to put a minor peeve about the pandemic. I linked my verses about insects (Ants in my pants are making me dance) and wanted to show how the song could be able for us the shake some negativity off from the past year and put it in the song. So I did some simple verses about missing family, coffee with friends and lack of hugs. It was fun.

I finished with Simple Gifts, stating that sometimes we just have to sing for ourselves. I share the lyrics on the screen and we sang it several times together, with the last verse on their own. As it turns out, it was a good song to finish the session. Time was up and we returned to the larger group.

I had planned on finishing with A Little Help From My Friends but ran out of time. I was able, though, to bring in up in my short recap. I think it really hit home for the larger group. “What would you say if I sang out of tune, would you get up and walk out on me?” I thanked the group for not getting up and walking out on me. The facilitator took that as a perfect way to bring the larger session to a close. Sometimes things just work out like that.

It was an intense half-hour session but I did my job well. Still, I’m a little rusty from the lay-off.

I’m glad I had the opportunity to get paid for my skills.