It’s been a long time since I’ve made a journal entry, basically because I haven’t had many gigs to talk about. There were a few farmers’ markets in the fall but no school gigs for a year. Finally, I had my first Zoom assemblies on Friday with a new school in Allentown – Anna May Hayes ES, a combination of two older inner city schools, including Cleveland ES, a school I’ve played for over 30 years. My friend John Christie taught there some 18 years ago and some of the teachers remember me from back then.

I was sponsored by Community in Schools, an umbrella organization for art/education for all the elementary Allentown schools. The process was long and tedious (and expensive) since this organization insists on background checks on several levels (even for Zoom). I rounded up my paperwork and sent it in, only to find out that they were all outdated. So, I embarked on my PA Child Abuse, FBI Criminal Record and fingerprinting (seems my prints go out f date, too.) So, I spent a bunch of money to keep the gig. So it goes these days.

I was part of a Rewards Friday program for the kids, all of whom are still at home, working on Zoom with their teachers. The school itself is now complete and sitting empty, apparently a beautiful building waiting to open. I was scheduled for two half-hour sessions, with 3 – 5 students and then K – 2 next. I must say that this has been hanging over my head for weeks and I was eager to get it done. I lose sleep over these things. 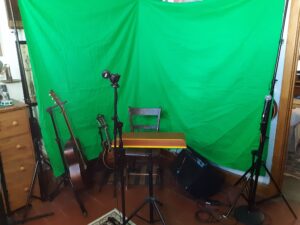 I did a lot of prep for this, having done quite a few Teaching Artists sessions over the last 10 months on Zoom technology and audience techniques. I finally got to use my green screen and external camera and that was fun. I also decided to use a video I worked up with John Christie on Giants and used it in the first session with the older kids. I decided not to use it for the second group; it seemed to distract from the “liveness” of the show. I’m sure some of the teachers in attendance would have enjoyed seeing their old comrade, but so it goes.

The green screen allowed me to change scenery for each song, something I figured would help retain eyes on the screen. I believe it served that purpose. I used peanut butter and jelly sandwich, Mars landscape, beach, assembly kids, a sine wave, etc. I had things in order so the transitions were fairly smooth. 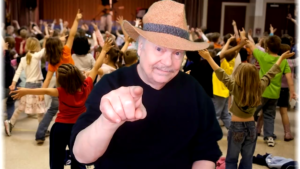 I did I Like Peanut Butter, Tutti Tah, Cat Came Back, I Wanna Be a Dog, Giants (video), and Tropical Vacation. I emphasized movement and dance, as well as singing, and that proved really effective, even surprising several of the teachers unfamiliar with how I work.

Unfortunately, I was unable to watch the kids on the grid to watch and record their interactions. I was on the school’s Zoom account. I really wanted to be able to connect with individual students and also get some visual feedback from the show. I hope to learn from this for future Zooms.

“He has a love for music, children and entertaining and well… that just clicks.”

“Fun, making faces with the kids!”

“The children were dancing, smiling and engaged! Dave has a gift for connecting with children. You can’t ask for more in a performance. Highly recommended.”

I found myself physically and mentally exhausted afterwards and missed the closure of getting the $$ check afterwards. I was extremely glad to  complete the task that was weighing on me for months, and proud that it seemed to go well. It’s not the same, by any means, as performing for 500 kids in an auditorium, but rewarding unto itself.