Not many posts on this site these days, since I’ve kind of used my blog to catalogue my professional life as a performer. But a nice gig fell into my lap on Wednesday for a Friday Farmers’ Market gig. I jumped on it.

There is a small farmers’ market on the Greenway in South Bethlehem, only a few blocks from my home. I signed up for three hours from 2:30 to 5:30 pm and headed down to the site with my sound system in hand if I needed it. Turns out that acoustic was just fine. The site was the nice park extension/amphitheater next to Touchstone Theater and was an elegant place to play. I brought my bag of instruments in case some kids passed by, but found it unnecessary. Few kids and few families. Lots of jogging Lehigh students though which kept my visual scroll amused for the day. 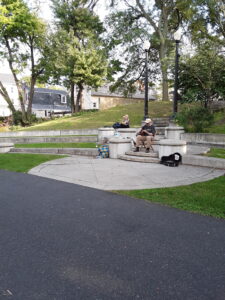 Small vendors were spaced out along the Greenway with an ice cream stand across from me and a home bakery Bread! to my left and Jennie’s a little further down the path. There was a slow flow of folks stopping by, but an interesting assortment of local folks, walkers, joggers, bevies of blond Lehigh women, and occasional curious folks out for a stroll on a nice, autumn day. Very pleasant.

The ice cream lady and the bakery woman were a fine audience. In fact, the Bread! lady commented that she had brought her kids to see me at Musikfest through the years (not an uncommon comment), and her young daughter had done I Like Peanut Butter for Show and Tell a long time ago. She was kind enough to give me a breakfast pastry (which I just finished off) as a tip. I had to pay for my cup of chocolate ice cream, though. (I didn’t mind supporting her business)

I had three hours to fill so I jumped right in. I did pretty well though I struggle with some lyrics that I really should know by now (I Wanna Be a Dog), so there was some rust, but, for the most part, the playing was really solid and I had plenty of material. I’ve been woodshedding with my daily FB posts but some songs have disappeared over the horizon since I don’t have gigs like this to play the songs regularly. Still, it felt really good to be playing in public again. The three hours didn’t exactly fly, but I found myself at the end in good shape, my voice a tad ragged but my fingers, mind and spirit in good shape. Can’t ask for more. 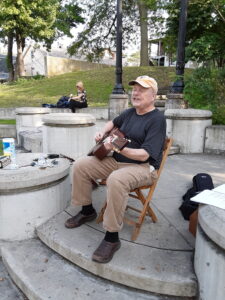 I have the Saucon Valley FM on Sunday – only a two hour gig – so that will seem like a walk in the park.  I really miss my frequent FM gigs this summer. They really kept my chops and my repertoire strong.