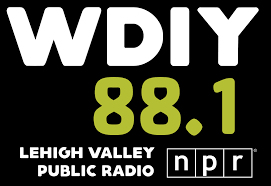 WDIY had its 25th Anniversary party on Saturday at the IceHouse. I signed up to be a greeter early on, as folks came in the building. I’m glad I can have a presence at this event, to put a face behind my radio shows, hang out with fellow programmers and other former board members. Lots of chat and friendship going on.

Craig’s band was the feature for this year’s event and it was a delightful change from some of the oldies cover bands in the past. As I told Craig, “You play for real.” Craig had invited me to sit in earlier in the week and I jumped at the chance. I figured out a couple songs and landed on Nadine by Chuck Berry – a simple rocker that the band could pick up with no rehearsal.

I actually danced earlier on in the set as a woman asked me to dance, and, surprise, surprise, I said yes. It felt good, and though I really couldn’t hear her with the loud music, I figured she didn’t really know who I was. Her husband watched from the seats, though. Folks saw me dance for the first time this century. 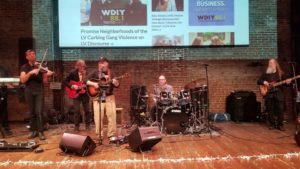 Craig called me up and I took his acoustic while he picked up his electric and we launched into Nadine. Drummer Don laid down the beat, Wayde the bass line and we kicked it, with leads on piano (Cliff) and guitar (Craig). People got up and danced. I did screw up half a verse, but who knows….  Great reaction and it felt good to play with these guys. We finished up and Craig said to do another one.

After a brief pause, I decided to do Dixie Chicken. A good choice though I wasn’t sure the band knew all the changes. Not to worry, though there are a few minor wrinkles. It’s nice to have faith in these players. I’ve installed a simple chord change in the lead part, one that sets up nicely for improv and it worked great. The first one was built for Nyke on violin, and, as expected, he chewed it up. It was a great spotlight for him, one missing during most of the first set. Craig followed with a blistering lead that folks acknowledged warmly. A friend, Rick Weaver, commented later that I have to ability to provide space for these musicians and can lead the band well, especially in these open situations. The song went over really well, with several Little Feat fans coming up and thanking me for doing it.

I particularly enjoyed having the chance to play live for a full house of WDIY supporters, quite a sophisticated audience, for sure. I believe that many folks haven’t seen me play, and it was an opportunity to promote the Troubadour concert next month.

I hung out for awhile, enjoyed conversations with some good-looking women (yup, I fell in love briefly with one) and basked in some limelight. But, the social ramble began to wear me out; I excused myself with some talk about my social introversion, packed up my guitar and headed back to the SouthSide.

I played and I danced. Pretty good for a Saturday night in Bethlehem. Craig continues to be very good friend.