Sunday was a curious day on the planet. I prepared material for my morning DIY radio show, picked up some fine art work from my long-time friend and artist Barbara Kozero and headed to the station for my show. There were the various blips in the presentation but I pulled off a pretty good show (even if Tom Druckenmiller preempted my baseball set. (grrrr….).

I headed back to Godfrey’s to catch some of Pete’s Posse, an incredible New England acoustic trio. Another world class act this weekend at the club. (Ramona rocks!)

I decided to head over to Arts Quest for the 21st Greater Lehigh Valley Music Awards. I found out that they were charging nominees and came close to bolting. But, my friend Allison Gillespie rescued my ass with a free pass with her band. It proved to be a god-send. I got in. Sometimes I’m pretty arrogant.

The production was much better this year, though some of the performing acts still don’t know that a short set is sweet. (Always the critic…) As they rolled through the awards, the Godfrey’s Best Open Mike came up quickly, and I didn’t quite realize I should go up and get it. (Slow….). But I went up and waved and walked off. No need to speechify. As the event proceeded, I picked up the Godfrey’s Best Performance Venue, the Best Community Radio Programmer,  and, finally, (a surprise…) my Best Folk. That one I was not expecting at all.

I reflect on the six awards tonight, after running the small but mighty Godfrey’s Open Mike, I try to compartmentalize the afternoon at Arts Quest. I enjoyed the nods from lots of familiar faces (I am easily confused these days…) as well as hanging out with friends in the biz: players, newspaper writers, etc. This truly is a community experience. It’s nice to feel the support at this social level. I cherished each and every small moment with these friends.

The Radio award was interesting. I’ve received it fairly fraudulently for the last couple of years. There are other more heavily invested that me. But this year, I am spending a lot more energy in my shows, so this one finally felt deserved. 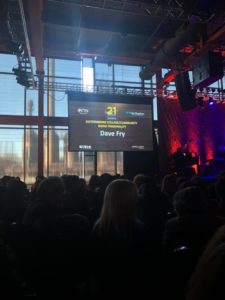 The Children’s award is a fairly default award. Though it feels good, my fellow nominees are deserving, especially Kira Willey. I have thought about retiring from this award, but today was a good pat on the back for my legacy, more than anything. I made a great acceptance speech, “I proud to be the oldest person in this category (children’s music)”. Nice feedback from folks.

The Folk award was quite unexpected. Several other performers have won this recently, with far more exposure in local bars. I really thought folks had moved on. I truly appreciate this one; folks continue to see me perform in various venues, with various bands, and as a solo, so, I guess, I’m still out there. I suppose Troubadour air play  and a few CD’s has helped a lot. 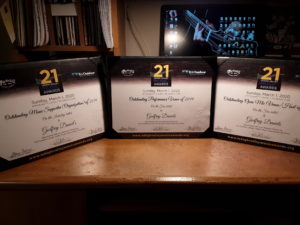 I was particularly gratified with the awards that Godfrey’s picked up: Outstanding  Performance Venue and Outstanding Music Supporter Organization, along with the Open Mike Venue. Together they signify the respect that Godfrey’s has in the Valley, but also how the “team” has shaped that respect. Ramona’s booking, Dina’s web design and radio show, my radio work, Nick on sound, etc. and the Board’s support, too. We beat out several larger venues and a multitude of bars, as well. That is mighty sweet.

I had to leave early to open Godfrey’s up for the open mike. I was particularly proud to inform Lou about his part in the Open Mike award. It was a low-key evening, as usual, but I take pride even on the quiet nights at Godfrey’s.

A full day of music.