I was looking forward to chatting with Christine tonight. She’s become quite a fixture on the LBGTQ circuit and is a regular performer now at Godfrey’s. It took a while to find a date since she no longer lives in the Philly area, but this worked out well.

Christine has worked her way through playing guitar with a kids’ music group (Cat’s Pajamas) a long time ago, playing small folk clubs like Godfrey’s and now is recognized as strong women’s songwriter. She’s got chops on the guitar to match her lyrics and also has become a confident performer. I knew this would work. I just had to figure how to get my music in sync with hers. 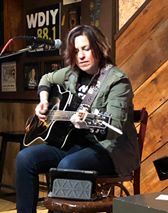 I started off with Branching Out (John Gorka) and mentioned that there was an artifact on the walls in the song. It was, of course, the Louisville Slugger bat that Christine Lavin gave John years ago. After the show, one woman said that this song took her in from the get go. A good choice for a new audience. We took off from there as we played songs, talked about her early days watching performers like The Story and Jonatha Brooks here on this stage, saying “that’s what I want to do.” 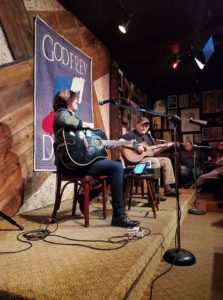 It was a good crowd, for a change, and she had lots of fans in the audience. This also afforded me a chance to play my songs in front of a fairly new audience for me. I played Rosie is a Friend of Mine, Giant, Lessons from Pete, and tried out some new ones: May You Never and What About the Bond, both landed well. Christine plays loud (too loud for my tastes) but that’s part of her aggressive sound. 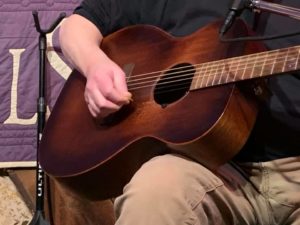 It was nice to share our philosophies about love, in a global sense, getting people to sing along, songwriting, “taking it to the bridge”, open tunings and more. As usual, it was good session and folks really enjoyed the evening, as did Christine.