As usual, we had another stimulating session at Godfrey’s with several short exercises.

Bill Christine led a small one with three of us in the beginning, Creating Monsters. Folding an 8×11 paper into 4 sections, we each did a small doodle in the four spaces, passed them around several times and added more lines to create monsters. Bill then asked us to write answers to several questions, like what do you need to do, a line from a poem or song, a command from a king or queen and the like. We then put the lines into captions for the pictures. A great opportunity to collaborate and create. 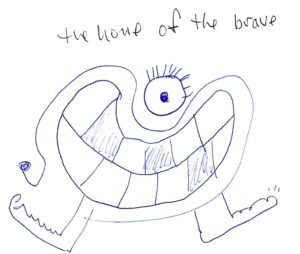 The Home of the Brave

I’ve Got to Bathe the Hamster.

Where Have All the Flowers Gone?

I led the next one as some fellow TA’s arrived from a Bethlehem City Council meeting. I pulled out the lyrics to Dylan’s Hard Rain Gonna Fall, a fairly dark, apocalyptic song that has a raft of imagery in each line. I asked that we each pull one line that struck us and then put it in a four-line piece, not necessarily in rhyme.

We came up with some interesting work, and, as we discussed later, the images revealed something of how we work as artists. As always, the discussion was rich.

I’ll walk to the depths of the deepest, black forest,

I’ll swim with the blue and the purple-backed shark,

I’ll float in the lightening and soar in the thunder,

I’ll waltz in the clefts left in the quake of my world.

The forest was hollow, the wind kept whippin’.

And no one was with me but three sullen ravens.

I saw a black branch with blood that kept drippin’,

On the bones of the judges so carefully shaven.

Ten thousand miles in the mouth of a graveyard,

The time, it is gone before things really turn bard

The sound of silence is quite deafening

We’re lost in the vast hollows of unspeakable rage,

I heard ten thousand whispering and nobody listening,

So how can I can I keep from singing?

Jenny Gilrain then gave us a short Hilda Doolittle poem. At first, we got to “orchestrate” the rest of us, using the verbs at the beginning of each line – whirling, covering, etc. We then got to animate the poem through movement and then discuss our efforts. Great stuff and wonderful to see each of us acting it out.

Oread  by H. D.
Whirl up, sea—
whirl your pointed pines,
splash your great pines
on our rocks,
hurl your green over us,
cover us with your pools of fir.

At the end, we discussed the latest TAMA webinar session with Eric Booth on Advocacy. We decided that we’ve come up short in involving others into our sessions, as rich as they are. We need to spread these exercises to other TA’s, teachers, etc. We decided to move our next meeting to Touchstone Theater in order to involve, hopefully, their interns in this process.