I haven’t play this market before so I got in with about a half hour to go, found the site and checked in with the market manager. They had a sound system available but it took some time to figure out things like the power strip, guitar input, etc. but I was ready to go on time.

There’s a nice cafe area that folks get food and drinks from the vendors and settle in. The place was jumpin’ on a Friday night and I spied my friend Steve Capwell in the back. A few other friendly faces dropped by as well. As I got comfortable, I asked Steve to get out his harps out to jam along with me from where he sat. Nice use of the space. 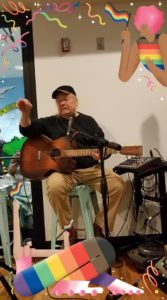 A young family was up front and, naturally I started talking with the young son as he was working on his mac and cheese. Yet, his two year old sister really picked up on the music, pointing at me, bopping in her highchair, and simply connecting with me. It was great and her parents and my friends in the space picked up on it, too.

It’s been a while since I’ve played out so I was glad to get back in saddle. I did pretty well with the material with a few lyric bumps. One family had two boys who were on a dance jag and did some kind of chicken move, so I played Chicken Ain’t Nothin’ But a Bird while they went nuts. The mom started to tell them to calm down but I said that it was fine and I was trying to tire them out. We let it roll. Good energy in the house.

As things cleared out, I invited Steve to come up front so we could do some closeup jamming, and we pulled off some nice blues together. He made things comfortable for me.

I finished up, and, with the help of my friends, packed things into my car with my “pizza-to-go” for later. It was a good gig: the venue was friendly and folks listened for the most part, a parking place for the musician and a sound system on hand. I’ll be back in October for the next one.

The pizza was horrible.