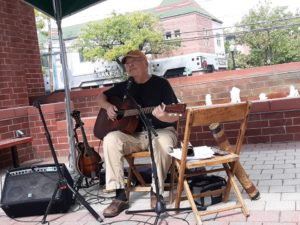 My gig at my local farmers’ market finally rolled around on Thursday, four months into the season. I’ve had a beef with this market for a couple of years. I used to play here every six weeks or so, and felt that it was my contribution to my neighborhood. I also thought that I was providing quality and a personal aspect to this event. I am locally sources, to say the least. But. the powers that be have decided that a wide diversity of players is what they want, and I can’t dispute that. But, the quality has been quite spotty though there have been pleasant surprises.

As usual, they booked me for a children’s day and there were none to be seen. So that gave me the opportunity to bang out my good stuff. I like the arena – an acoustic village square with buildings on three sides. I am able, with my small guitar/vocal amp, to fill the space while not being too loud to disrupt the business chatter with the vendors and their clients. Not everyone has these sensibilities.

A couple of acquaintances stopped by to listen and that made me sharped my playing. Curiously, when I began, a group of Lehigh coeds were eating lunch at a table up front. Amazingly I was able to divert some of their attention to my music (and chat) to the point that one girl bought my Troubadour CD! That made my day.

It was a nice day with a hint of a passing shower but it felt good to be playing once again only a block from home. I still felt like I was auditioning for the market manager though, trying to prove to her that I should play here regularly. It remains a battle to remain relevant.