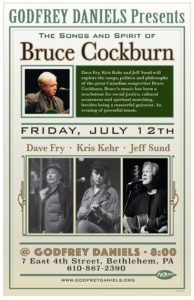 Jeff Sund, Kris Kehr and I had done this project as a Dave’s Night Out in November of 2018 and found it to be a very satisfying collaboration of our own repertoire of Cockburn material; we had many of these tunes in our musical DNA, if we didn’t actually play them ourselves. We put in a rehearsal a couple of weeks ago and got together earlier in the evening to run through the songs and quasi-arrangements. I got to play mandolin on songs I didn’t front, Kris played bass, twelve-string and octave mandolin and Jeff had strong guitar arrangements for his tune and could play leads on others.

We decided to play straight through for an hour and a half, and perhaps that was a mistake. There was a really small audience on hand with some folk new to the club as well. Though we played well, there was not a critical mass of people to generate a spark and I felt a little awkward in the presentation. It was partially due to the summer season but I always chalk it up to my lack of a following for my adult material. Bruce Cockburn is not exactly a house-hold name, either, though with a devoted following.

I was glad to have a chance to play Creation Dream and Foxglove, two nice instrumentals/tunes I rarely play live, though they are good kitchen tunes for me. Kris and Jeff did nice renditions and I nailed Barrelhouse and Tokyo but missed doing What About the Bond since the set was getting long. We finished up nicely with Rocket Launcher and Wonder Where the Lions Are. Some folks drifted in toward the end (there was a Arts Quest concert cancelled due to a suicidal man on the Steel Stacks), so we were able to give these folks a solid introduction to Godfrey’s.

Kris did a great job of preparing bass parts for a whole raft of material which really cemented the evening’s presentation. I could have done more work figuring out mandolin riffs on the other’s songs and working on vocal harmonies. It remains