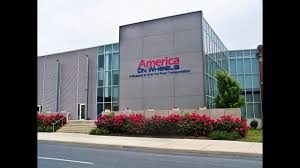 This was a summer camp type of situation at this fine automobile museum. They run a six-week camp for kids (same as The Discovery Center, PA Youth Theater and other cultural groups looking to make some money during the summer) so I had planned on a one hour set. The museum wanted to stretch that to an hour and a half, and though it’s tougher to hold kids’ attentions (especially in the summer), I agreed for a nominal fee hike. 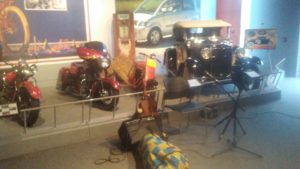 My set up at the museum.

I set up for a 10:15 start in a comfortable, carpeted part of the museum and started in. There were some slightly older kids who were a little tentative with my kids stuff, but leaned on the counselors to join in and we were off to a good start. Now, these were all white middle-class to upper class kids, as would seem natural for a vintage car museum. A couple other small groups filtered in (one with a cadre of boys that had an attitude) and then a large group of Latino and black kids with several adults as chaperones. They initially were off to the side but I tried to encourage them to move in with the other kids. There were some older girls and several boys who rolled their eyes about the whole situation and were obviously uncomfortable with a old white guy on acoustic guitar playing kids music.

So, that was the challenge: engage two different cultural groups, stretch my material for an extra half hour and still play my material. At one point, after a monster reference in one of the songs, I decided to ask the group to describe a theoretical monster. The fact that it was conversational made for a good break away from the folk music to a relatively adult conversation and that seemed to ease the tension in the room. I followed that with Giants and intentionally got one of the young scoffers to come up to play thundertube. Reluctantly and with a teacher’s insistence he came up. A younger and more demonstrative girl came up as well, and as we did the show, the reluctant lad persevered and the young actress lit up the room with faces and movement. For a while, the song took over.

At one point, I had to tell the four older Latina girls to put away their cell phones, and with a teacher’s insistence, they gracefully did. I took some time to explain what it’s like to perform for a distracted audience, how that makes for a harder situation for the artist, and came short of playing the ‘respect’ card. I hate to have obvious teaching moments in the middle of a show, but (and some teachers back me up on this) someone has to do it at these moments.

Eventually the Latino and black group took off for other parts of the museum and I finished the last 20 minutes with the white kids. Again, at the end I asked the teachers what they liked about the show and were somewhat shocked that I asked. They liked the Tutti Tah. Meh….

One clique of the white boys refused get involved in any way, and that got my dander up. This is symptomatic of summer camps when, away from school and family, some kids develop “summer attitude” where they are empowered to say NO. Unfortunately, the one ringleader had dragged four other younger boys into his sphere of influence. I still haven’t developed the sense to let it go. 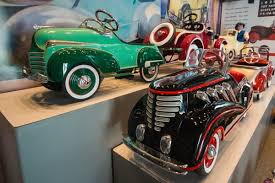 The set drained me, but as I packed up, I struck up a conversation with the elder gentleman who helped me load in and out. He told me the tale of working with his dad, a drummer, at the Lyric Burlesque Theater here in Allentown when he was a kid. One time, at the age of six (“I remember it to this day”), when the famous stripper Blaze Starr was working at the theater, she noticed him back stage and bend down to say, “What a fine young man this is!” All he could see were two tassels swinging back and forth in front of his young eyes, a sight forever burned into his psyche. Great story.