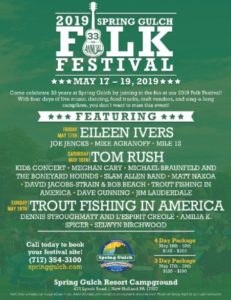 I landed this gig relatively recently and wondered to myself why I wasn’t on the festival poster. As I talked with Andy B., he said that there was some debate about continuing having a kids’ set start of the day. (Trout Fishing in America is doing Sunday’s family set, but they are at quite a different level than me.) The demographics spell out fewer families with kids, an older folk audience and folks generally staying up late at night and recovering at the noon show time. I commented that folk festivals really should maintain the tradition, and he agreed. But, not everyone thinks this way any more. Still, I was pleased to get the gig.

Since the festival offered some extra money, I decided to have Kris Kehr sit in on bass, to fatten the sound and appeal to the older folks in the audience. It’s also an important gig for me, playing a major stage in front of seasoned folkies. As it turned out, Kris was able to provide me the chance to pay attention to the material, the kids up front and stretch the songs. It was also good to catch up with my good friend in the ride down and back from the show.

Some kids popped up right away and dug into the instrument bag, giving us some visual action for the rest of the show. When I had kids come up for Tutti Tah and Peanut Butter and Jelly, the parents and grandparents brought out the cell phone cameras and snapped away. That’s a good thing, promo-wise.

The sound was great, Kris had my back, and the set moved well. I was able to balance between playing for the kids while entertaining the festival’s adult audience. It’s actually a tough gig.

Off to New Tripoli and Hackett Winery for a 5 pm set outdoors. I’m warmed up now!