This was a tripleheader that was postponed from an earlier foul weather date in February. It was at The Bancroft School, a year-old special needs school in the middle of an industrial park in central Jersey. This is a particularly well-organized and friendly facility. We set up in the pleasant room with a vast window behind us. Lots of room to move. 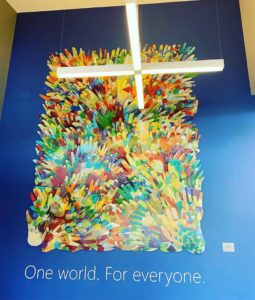 The first set was for the elementary kids, all with various learning differences, all accompanied individually by an aide. Since we were asked to cut down on the speechifying and concentrate on the music, I had to work hard on working on the segways between the music. The band knew what to do and we did a good 40 minute set, with kids and teachers moving to the music, pretty much seated where they were. I worked up a sweat on this one. It worked well, and the director was pleased with the volume, the kids’ reactions and the show in general.

The second set was for the high school aged set and the set flowed even better, with Kevin, Wayne and Nick picking up on the format we had done for the first set. I kept my banter down to, “We’re leaving the swing in New Orleans and headed to Chicago for some blues.” That maintained a thread for us and the teachers to stay connected. The third set consisted of the transition kids, late teen and early twenties, the kids who now are headed into the real world. A big step for them. These kids got up and danced as we ran a rather tight show the third time around. Kevin said at the end, and I agreed, that there are few, if any, musical groups who could pull off playing for this type of group.

A professional photographer for the school snapped some nice band pix as well as some nice shots of the kids.

The school coordinator wrote to YANJ:

“Young Audiences Arts for Learning Assembly Today: A huge Thank You to Dave, Kevin, Nick, and Wayne of RockRoots for three awesome shows today that represents our American history! These four gentlemen shared so much energy, excitement, enthusiasm, and talent with our students at the Bancroft School!Dancing, singing, and smiles filled the room! Great job! Thank you so much!”

It was a long day with 1.5 hour drive both ways, but these are the good gigs that feed our souls.