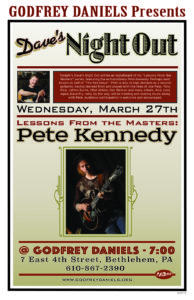 It is always a pleasure to spend time with Pete Kennedy, talking about the biz of performance, folk music and guitar. Tonight was no different. Pete, besides being a great guitarist, is a highly intelligent and creative person who also happens to be a good listener. I enjoy his respect for what I do as much as I respect his talents so I was able to share some of what I do as a Teaching Artist.

There were few folks in the house tonight, per usual, but the two hours passed by quickly, leaving all in the room slightly intoxicated with the proceedings. Pete is able to clearly expound on guitar technique, songwriting, touring, performance and philosophy. Definitely my kind of person.

Tonight was interesting in that I now have the possibility of taking these DNO shows to a new level on the internet. Ron Olesko, folk radio programmer, is now putting together an internet radio station and wants to include a Dave’s Night Out weekly show. This would fit the bill perfectly. Ron is looking for material that is not just spinning records but something deeper. Both Pete and I were aware of playing to this potential audience as well as to the few folks in the house.

Pete played behind some of my tunes: Branching Out, Pinto Pony, I’m Part of the Union and Knockin’ on Heaven’s Door, and was able to describe his thoughts on how to back up the song. Listen first, add in small licks, face the singer (address the performer’s presence), play lead when needed, be aware of the dynamics of the song and support the song. All very obvious techniques that, unfortunately, few are aware of.

Pete also stepped up with several great musical moments, including his Rhapsody in Blue on Uke and a spontaneous Greatest Guitar Licks medley that was astounding. He is a brilliant player.

It is remarkable that Pete makes this trip out of the NY for a measly $100 on a Wednesday night to share this stage with me. He knows what this is all about. I have the greatest respect for folk like him who respect Godfrey Daniels and myself as a fellow musician. Transcendental. And it is a shame that the Lehigh Valley doesn’t come out to support this series. Perhaps folk radio will change this.