It’s usually a productive week, and today was doubly so. RockRoots was booked at two schools outside of Philly in Drexel Hill and Primos for two morning assemblies and an afternoon one. A rare doubleheader for the band, especially efficient since both schools were only 3 miles from each other. How cool is that? A tour!

There was some concern with the weather today, with cloudy skies in the schools’ area but snow in the Lehigh Valley. I take pains to contact the schools the day before to, first, stay in touch with the school, and secondly, to talk about the weather. As it turns out, there was a split between okay and nasty conditions and we went ahead, leaving at 6:45 am for the gigs. It worked out, amazingly.

We had two assemblies at 9 and 10:30 am at St. Andrew’s in Drexel Hill. 550 K-8, with the little kids first and the older kids later. It’s always a remarkable difference between the audiences (and teachers…) and, upon reflection, the band intuitively knows how to play to both. It’s a subtle thing, but these guys are pros.

The band played great and I was glad that I did my part well. I’m once again comfortable standing through both sets (no small thing w/ two new hips), and I remembered and performed the script of the show well. It’s tough to keep my dialogue tight after a couple of months between gigs, but, over all, today, it was in good shape. (One never knows, does one?) 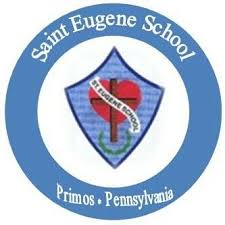 We packed up and headed off through winding Philly suburbia (lots of stonework homes) and found St. Eugenes, still just a cloudy day in January. I got there early, connected with Donna, our teacher/connection. I had the chance to talk with a young girl about guitar. It was a pretty cool session, just me, the girl and the teacher (who allowed the two of use to have some serious chat about playing music, her playing my guitar and getting her to think about finding others in her neighborhood circle to help her out). These small moments are precious. 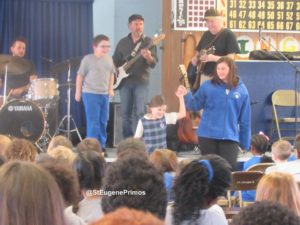 The band arrived and we set up for about 250 K-8 kids. Both schools were quite bi-racial and that’s a pretty cool audience for us. RockRoots is exactly a demonstration of that. The show was wonderfully received by teachers and kids, lots of intense moments with kids on stage, teacher interactions and moments of dancing delight. 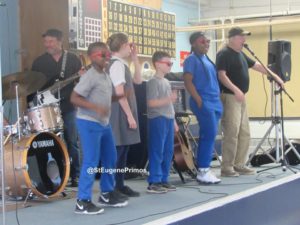 It truly is about particle and wave. As performers, we get experience an audience as a whole, laughing and dancing, as well get to see individuals (adults and kids) just having a great time in their bodies, in a safe space, amongst friends and teachers. This is powerful stuff and there is energy born in the process. I am blessed to be able to witness this and be a part in its genesis. (Boy, is that deep?!)

We negotiated the weather (it only got nasty when we hit the rise into the Quakertown area), had three wonderful gigs, played for 800 kids and teachers and we did it well. I would say it was a very good day, one that began with quite a bit of uncertainty.

Another good day on the planet.