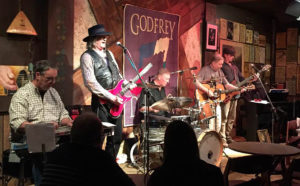 This was the fifth annual gathering of Steppin’ Out! on the Friday after Thanksgiving and the first gig after our set at Liederplatz last August. I think we finally have a solid concept of being more than a reunion affair, an actual performing ensemble. It’s been an interesting process this fall in preparation for this gig. We’re a pretty good band.

We are somewhat handicapped with Reid being a full-time performing musician in New England. We have to set up gigs like this months in advance to accommodate his schedule. I’ve been the band secretary and creative director so it’s been up to me to guide the project. We put together three rehearsals prior to Friday with four, five or six members and did a lot of homework via emails, dropboxes and other useful social devices, and, we are smarter as musicians as well. (I hope). Each session was particularly professional and productive. These dialogues create communication and trust and go a long way to our comfort on stage. Lots of funny chatter as happens with good friends.

I pulled up our two-hour set from Musikfest and started from there. I put out feelers for new material from the folks and everybody came up with new stuff. That’s a sign that we are all creatively invested in the band. Peggy, Kris, Hub and I offered some challenging songs, I pulled up Troubadour tunes, Jeff put together a rock and roll medley and counted on Reid’s amazing skills as a spontaneous and gifted improvisor. The antennae is always up with him.

I put together two strong sets and brought them to the four hour rehearsal on Friday afternoon (with Reid) and it was, again, remarkable how we were able to roll through the material, work on some details, pass out the leads. We really got things ready for the show later on that evening. It’s great working with a real performing unit. We took a three-hour break to come back for a sound check and run a few songs.

I had hoped to take a break before the show but I found myself having to help out setting up the room, making coffee and working the counter due to our usual shortage of volunteers at my shows. Pisses me off, but I have to jump in when there’s a need at the club.

We hit the stage a little after 8 pm and started out with Choo Choo Cha Boogie, a tight opener and Reid immediately followed with Buzzy’s You Got What It Takes, nailing his vocal gymnastics at the end. With that opening statement, we settled into our comfortable banter with the audience and rolled out the set of old favorites and the new tunes. Peggy came up and made her presence a real part of the band, now quite energized as a singer and performer. We were really listening to each other, adapting to various wrinkles in our execution and I know that the audience is engaged by the process.

I was particularly gratified that, thanks to Concert Window on the web, my daughter Rosalie could catch the first set from her home in Italy. She said said, “Spectacular show tonight! So glad I could tune in. You guys looked like you had a blast

The second set settled in quickly with our country swing set, a Beatles set, some old favorites (as got out the mandolin and Jeff fronted the band from guitar and piano, Hub played great drums.) and finished up with our rock and roll medley. We came off stage to a standing ovation but I was winded. We hadn’t planned an encore so I was grasping at what to do. Kris mentioned we didn’t do Don’t Call Me Early, and, bang, that was the perfect way to end the evening. It was serendipity, falling out of a mistake I had made in forgetting it in the second set.  But it was a well-rehearsed new song and referenced getting up in tomorrow morning after this gig; it also got people singing and we almost nailed the ending (no one else noticed…). It turned out to be spot on for the final coda on the show.

Encore: Don’t Call Me Early – Dave (an unexpected rouser of an encore)