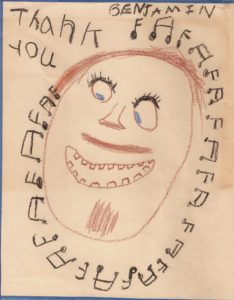 Today, my second day with the J-boys and Taniya at Marvine’s afterschool program, was a challenge, for sure. The three boys want to jump around, do the floss and explore the classroom while Taniya is incredibly hip, often ahead of me. So, it’s a constant search for balance among the needs of each kid. Often, at a K level, they haven’t absorbed standard behavior in such a public space, seeing how it’s transition from daycare and home to school.

My teenage proctor Anna didn’t show today… so much for that experiment. I could use someone like her to bounce things off of and give the kids some perspective.

I introduced the rain stick and the mandolin today, both productive and exciting explorations. The rain stick continues to be a magical instrument for kids (and adults) and it stops people in their tracks. We get to talk about wood, trees, cacti, beads, water, ocean, and cover a lot of creative thought. And then they get to learn how to control the sound with their own brains and bodies. Powerful.

The mandolin is a more intellectual endeavor with these kids in that we talk about strings, wood, size, number of strings, color, so it’s a different kind of exploration, especially when I have to control the hands-on nature of these kids. I give them a chance to do it after a while but controlling the initial urge to touch the instruments is a work in progress. I played A Place in the Choir on the mandolin as an example.

Movement is where it’s at with these kids so I have to do that as much as I can. Jason has absolutely no control and he drives the other boys with his energy. But, he’s a good kid.

I broke out the puppets for a session with Old MacDonald’s Farm. I tried to get them to animate their puppets, get them to ‘sing’ the song but it was a foreign concept at this age (except for Taniya, of course). But, with only four kids, I can deal with each one on a personal level, and that will be the strength of this residency.

The time goes by quickly and, as usual, got me out of a Monday funk.