I’m in charge of opening and running the Godfrey’s Open Mike these days, so 6 pm rolled around and I headed downstairs to open up, make coffee, set up tables and chairs, work the counter and sign people up for the open mike.

There are fewer folks signing up these days, but some regulars show up to work on new material, chat about what’s going on in our lives and drool over each other’s instruments. I delight in the fact that we’re all getting better, and tonight was just such an example. Gordon Ward, Mance Robinson, Bill Schachter, Bill Hall, Scott Chalupka and others. Good friends.

The featured act tonight was Joel Keeley, a precocious 20 year old from Berks County. He has great chops on guitar (false harmonics, etc.), a nice tenor voice, a pleasant hand on frailing banjo and a relaxed stage presence. All quite remarkable and has a really deep understanding and historical appreciation of the musicians that got us here. Merle Haggard, Steve Martin’s band, etc. “An old soul” is the phrase. He did a great set and Godfrey’s will get him back before he heads to Nashville. 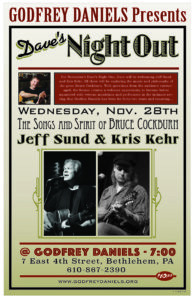 Since I’ve been anticipating the Dave’s Night Out with Jeff Sund and Kris Kehr later this month, I’ve been looking forward to getting two Bruce Cockburn tunes up and running, one’s I’ve been woodshedding over the last two weeks. I had premiered What About the Bond? at the Riegelsville Jam on Wednesday but needed to do Tokyo in front of people.

I’ve been finding time to sit down and pound the tunes out, working on the ever elusive lyrics, singing, solidifying the rhythm guitar parts and generally having a good time playing the songs. So it was lined up to launch them at the open mike.

I got out my GD Martin for the first time in a while and gave it ago. Remarkably I pulled both tunes off pretty strong. Good! But, it was a three-song night and I hadn’t planned on the third one. I brought up Rocket Launcher and folks clambered for that one.  So I went cold turkey, and after a few stabs at settling in on the chord pattern and rhythm, I found my performance center and delivered a solid and impassioned version, nailed the ending, too. This song remains a challenge to do it justice but I enjoy giving it a shot.