We returned to this parochial school in Penndel, PA this afternoon for a single show for about 300 K – 8th graders. As we set up, the custodian, Wayne and myself struck up a conversation. The custodian (as is often the case) was a musician at one time and said he had his set of drums packed up, wanting to find some folks to play with. It’s a hard thing to do now a days. He was eagerly awaiting our return to this school after two years.

We were in the gym for this one, a very humid, rainy day. The kids were great and when we got the kids up to dance, there was lots of Floss, the Hype and Boneless going on, along with the Disco and Frug that we always add in. It was actually great to see the kids actively doing their own dances, something I haven’t seen in a while.

It’s been a couple months since our last show and surprisingly I did pretty well on my part. The band was good as well, though we lost the beat and, being distracted, I lost the lyrics on the RockRoots Rap. Kevin called out the 1 beat several times and eventually we linked up again. Other than that, it was a crisp show, very much appreciated by the school – the reason why we’ve returned for the last three years in a row.

I had a brainstorm before the show. I asked the kids and teachers to draw some pictures of the band and send them to me. I look forward to sharing them with our RockRoots FaceBook posts. Here are a couple of old ones. 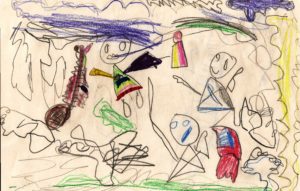 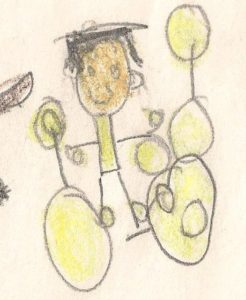 Early school year assemblies are rare these days and it was good to be back on the road again this fall.