I had the privilege to book the acts at Godfrey Daniels Day at Musikfest and did a good job of mixing strong local acts with a very strong national duo: The Best of Open Mike with  Evan Miklosey

Serene Green (the lads have grown up),

and my own Steppin’ Out!

The weather forecast was lousy the day before but it turned out to be a rainless day. Quite amazing! Whodathunk?

Steppin’ Out! has been a project I’ve nurtured over the last few years, with our annual Black Friday gigs in November. But this band has become more than a reunion project and I welcomed this opportunity to showcase our work at Musikfest this year on a more public stage.

We have practiced three times over the last month or two, without Reid (in New Hampshire) and developed a good set of tunes, both old and new. We worked Peggy Salvatore into more of the songs, especially backup vocals on my Troubadour tunes. The last rehearsal we ran through the two hour set I had constructed so we figured we were in pretty good shape. 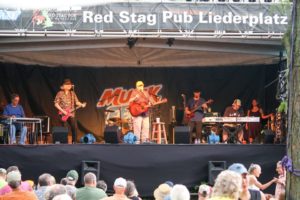 We started out strong and established ourselves well with some familiar songs and then departed from the “same olds” with a nice version of Mr. Bojangles and some of the Troubadour songs. But as we went along, there was some hesitation in the band when it came to communicating the leads and arrangements. It was a minor struggle. I have a hard time remembering all the nuances myself and count on our collective ability to adapt in the moment.  This chalks up to an unfamiliar experience for this ‘new’ band, performing on a big stage with big sound and a relative infrequent performance schedule. But the professionality comes through and we make it work, in a astounding leap of faith. (This is why I love these people – we trust in each other.)  This is performance stuff that only we notice, but it still distracts us from the excellence that we’ve come to expect. 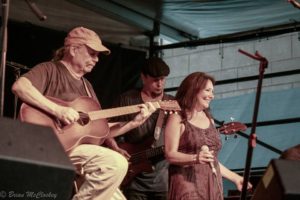 Peggy did a great job on Chuck E’s in Love (a new one for the band and a leap for me) and nailed her regular tunes. I welcome her presence on stage with us.

Reid was, as expected, extraordinary on guitar and vocals and can always be counted on to have his antennae up for tunes he isn’t familiar with.

Hub and Chris, the bookends, held down their parts well, with some effort (they add so much to the sound), Kris, on bass, was a little scattered but, considering he had just come up from a family vacation on the shore he was as solid as we could all expect from the young lad. 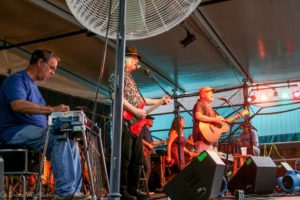 Jeff did great on drums but we struggled synching up on the rhythm on Lessons From Pete (more guitar in the monitors, please). But Jeff came up a led his mini-set on guitar and finished off the night on keys with his Jailhouse Rock. His versatility adds some diversity of our set. This has always set Steppin’ Out! apart from normal bands.

Part of the challenge in a two hour set is to rotate the spotlight among these talented people; that’s the most important thing on my mind when I write out the set. I have to mix musical styles, tempos, instrumentation, solo/band, lead vocals and leads, personalities, etc. I guess I’m the director (didn’t hit me til just now) and a Steppin’ Out! gig becomes a true theatrical production. We all recognize our little glitches but still we did a pretty good show today.

As we hit the hour and a quarter marker, I began to think that we were running short. I was also starting to feel some fatigue, having stood for the bulk of the set in humid weather. (This is still new territory for me, after two hip replacements, though it feels great to move to the music again.) I was doing some clock watching and pondering about the run to the end.

I added Rodeo Rider to the set on the spur of the moment (these folks trust me) and it was a good way to reset the mood with a nice, thoughtful folk/country tune. We followed with the mando/electric guitar acid jam on Clinch Mountain that was less solid than I had hoped it to be. But, we headed for the home stretch with proven tunes Texas Swing and Jailhouse Rock with people dancing as we finished at the crack of 9. I thanked folks for sticking around and brought the Godfrey’s day to a close. Done.

I was beat, drenched with sweat and relieved that we had pulled Steppin’ Out! off. Actually, it pretty amazing that a band that hadn’t played since November could command a situation like this. I wish we had had some time to unpack all that we did, but that’s part of a band gig. It took an act of will on my part as a musical director and the trust of my friends and bandmates to succeed in this project. It was a limited success. This band still means a lot to me; it’s a great vehicle for my ‘band’ self (non-solo/kids), my new material and for all of us as friends and musicians. These connections still run deep. I love Jeff, Kris, Chris, Hub, Peggy and Reid.