Thanks to the work of fellow kids’ performer Kira Willey, there is some family music during Musikfest (not at Musikfest) at the nearby WLVT-39 studios this week. She’s booked some impressive kids’ performers throughout the week and I landed the Wednesday spot. Two shows at 10 and 11 am, free to all.

I was there for load in at 8:30 pretty much before everyone else, brought in my guitar, stand, bag and CDs, ready for the 9:00 sound check. Really not much to do there. I was greeted by Katie, who was wonderfully welcoming. She informed me there was a dressing room! My goodness, such amenities. The later show would be taped.

We were all set up when Katie asked me if we could wait for a 10:05 start and there was no one there. It raised my usual doubts about playing in the Lehigh Valley, but as she opened the doors, moms, kids, toddlers and grandparents filtered in. There was actually a nice crowd with some familiar faces. Since the first show wasn’t being taped I opted for moving out from the sound stage and into the audience area with a big ole ABC rug. This was a good move. The sound man said, “TV-39 unplugged!” Me and Clapton. 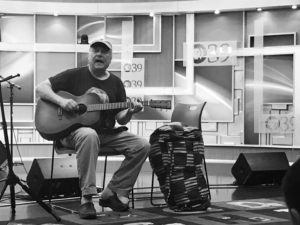 I laid into my good stuff and there was a good response. About 15 minutes in, I realized that the toddlers were losing interest so I went for the scarves and it refocused the audience. I did my scarf progression that I had worked on in recent summer school shows and finished with Jelly in the Dish. Great visuals. I also did some of the new Bear Hunt verses so there was lots of new energy in the show. We finished up, lots of dancing and instrument playing and then I set up back on the sound stage for the second set.

Since this was being taped, I had to work with sound and lights for this set but that wasn’t a problem. Another good crowd came in and away we went. I repeated the scarf set, the Bear Hunt set and added a few different tunes. The scarves were particularly a nice visual for the camera men who had one on me and several on the kids. I can’t wait to see the final copy.

The staff at the station were really blown away with what I did, commenting on the great interaction, movement and on the control I had of what was borderline chaos. I get the feeling that the other professional acts do their set show and, I’m sure, involve the kids, but not the way I do it. The staff was impressed that I was able to gauge the audience and change on the fly and keep it real. I’m proud that I can do that, and it’s nice to see that recognized.

I sold a few CDs and was paid a nice professional wage, something I couldn’t have gotten from Musikfest. The station may use me for some more of their family outreach programming during the rest of the year.

I was exhausted but pleased with my work today.