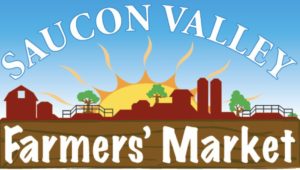 It’s been a rainy weekend in the Lehigh Valley and I was lucky that the weather for Sunday morning was precipitation free. I was set more in the middle of the vendors today and it’s great to get some positive reactions from the vendors, some dancing to the music and clapping after some songs. 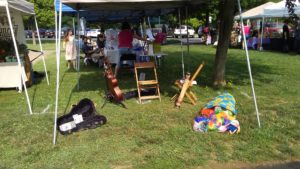 I had a special encounter with a young Chinese-American girl and her Chinese grandmother. The girl brought a play guitar and was ready to jam. I asked her what song whe wanted to do and then she played London Bridges (with several verses). I asked if she had any others and, quite cooly said, it was my turn. The grandmother, who spoke no English was taking video and pictures and delighting in the process. It made my day.

The girl hung out for 40 minutes, strumming along (on beat) with everything I was playing, even my excursions into my adult repertoire, occasionally tuning her inoperative plastic tuners. She was quite serious and often broke into a smile during Skip to My Lou. The passing marketeers enjoyed the scene.

I was really warmed up from my recent gigs and played better than usual, laying into my Martin to the point of breaking three strings. The vendor next to me took note that I was not going to break even on this gig with all the collateral damage.

The sun even came out on I Can See Clearly Now.

I love what I do. Blueberries are cheap, I got a free coffee, a bag of cool mushrooms, a tomato and a sourdough biscuit for the trouble. Not much in the way of tips, but some cold cash from the market staff. They do appreciate what I bring to the table.