After a long day on the road on Friday, I headed just cross town to Saturday’s FM at the Rose Garden. When I got there, there was a municipal band playing on the bandshell stage half way across the park. My first impression was, “That’s cool!” The right thing to be playing in a public park. But, I had a job to do and the market manager was somewhat befuddled with the situation, citing lack of communication with the city. 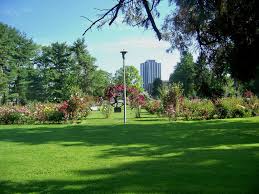 I figured I had to fulfill my commitment to the market so I set up behind a tree, pointing in the opposite direction. A few kids and parents stopped by, along with some friends who live nearby doing their Saturday cruise of the vegetables. While I was playing, I couldn’t hear the band and we negotiated the sound space.

I found out that the band using the bandshell was a guest band from NC, part of a lend/lease program with the Allentown Band. I imagine that it’s hard to find practice space for a large municipal band and this site on a Saturday morning was a good thing. 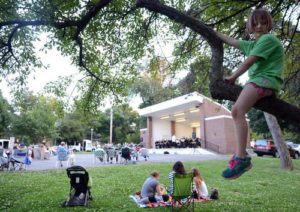 I wrapped up my set at 11:30 am and as I put down my guitar, the Allentown Band was finishing with The Stars and Stripes Forever, the quintessential community band song. They were in the piccolo part heading for the grand finale. I savored the situation and the powerful ending. Amazing to share this small park with such a great tradition.

Two hours playing under a tree in my hometown flew by. I got a fresh tomato from one vendor and a check for the whole season. Tonight, back on the SouthSide at Godfrey’s.