It was supposed to be a rainy day at the Saucon Valley Farmers’ Market but it turned out to gray but dry. I set up for my three hours under a pop-up among the artisans, several familiar faces among the vendors. Initially, I felt a little out of practice, and I remember finishing last year’s season pretty strong. But, I settled in, playing a mix of familiar tunes with some I need work on. Bit by bit, the vendors around me applauded for songs and I felt quite at home.

There were some kids, parents and grandparents stopping by and I worked the kids with the help of the rhythm bag. Lots of good moments, especially with folks who were familiar with my music. Cat Came Back was suggested by a grandmom and her daughter and her shy son, trying to pass on some good memories across the generations.

Perhaps the coolest moment came when Don Skrobak, a face from the past, stopped by and said he had one of my old guitars in his car, my old Favilla, my first good guitar I bought in the early 70’s. He had sent me a photo of it a couple of years ago and I have it on my desktop rotation.

He brought it out and it was more beat up than I remembered but it was cool to play it again. I tuned it up and played a song for Don and his wife. They got a kick out of hearing it played in my hands. Don asked me to sign it. He had brought it to Godfrey’s for a Maria Muldaur show (I wasn’t there that night) and got her to sign it. So, I put my signature right next to hers. 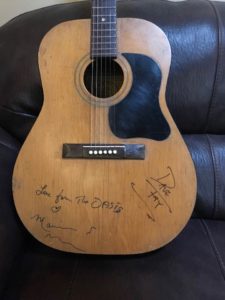 I fairly much breezed through the morning and, without a watch on me, I asked a friend for the time. It was 11:50 and only 10 minutes left. Time flies. And it didn’t rain. Not a lot in tips, but I sold one CD to a woman who wants to hire me for her senior’s facility. Still, a good day on the planet.