End of the year gigs are always a good thing and the Peeps Fest is a welcome local gig that pays well. It has its quirks but there’s a sound system and it’s only five minutes from home. Peeps is one of the products of Just Born Candy, a fairly large manufacturing plant on the northside of Bethlehem. It’s great to have them sponsor this sugar-coated festival. 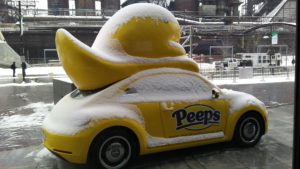 I was signed up for three sets at 10 am, 12 noon and 2 pm, so it is similar to a bar gig, putting in at least 6 hours on the job. I was the opening slot, so folks were filtering in for my first set. Thankfully, there were some familiar faces there to work with, off the bat. I cranked up my strong stuff knowing I could probably be able to repeat some of it later in the afternoon (though I enjoy the challenge of not repeating songs during a gig like this.). Start strong.

I swapped sets with Ari, the magician I’ve worked with over the last couple of years. He’s good and has fairly hip stage patter but sitting through two of his sets is tedious. Same jokes, tricks, attitude and, worst of all, a piercing “Aaaaah!” that he uses to express surprise. Assault on the ears…… Still, he gathers crowds.

This area is essentially in a mall, with movies, snackbar, knick knack shop and three levels of mayhem, promotional ventures (haircuts, child care, summer camp grounds, etc. etc. etc.) and more. I asked for some extra seating for my area but no help. Just the plastic tables and chairs that are there for eating. Not really an inviting place. The folks at the welcome counter said that folks would be standing to watch, and I shot them a dirty look. For a family show??? Disconnect.

Still, I was able to connect with the folks who showed up, striking up conversations with the adults, having the kids graze and play in the instrument field in front of me, and watching folks interact with their families. It’s always good. And a challenge.

As powerful as the backdrop of the steel stacks is behind me, it is particularly lousy as a stage setting. The lighting is miserable, the sound comes from the ceiling and there is no visual focus for the performer. I have a tenuous relationship with this organization so I have to lay low with my suggestions. This “stage” is a minor part of the whole entertainment mecca of Arts Quest and this is very low on their horizon, but they could really sharpen it up.

Still, I got to exercise some part of my kids’ repertoire I don’t usually get to play, freshen up my guitar playing, play musical catch with an audience and watch the snow slowly drift down on the steel stacks of my hometown. There were moments of beauty and art, for sure.