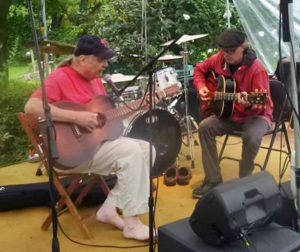 I had my yearly chance to jam with Steve Kimock at Ken  Labor Day Weekend party. Steve stops in to sit in with the local LV bar band guys, and I usually try to do an acoustic set early in the proceedings. Steve asked if he could sit in with me, and I agreed right from the start. We did it last year and it was fabulous.

Steve has always been a ‘boy genius’ on guitar, and, having left the Lehigh Valley years ago, moved out to San Francisco and fell in with the Grateful Dead crowd and joined that jam band scene. He now tours internationally with his mostly instrumental music in front of thousands of people, folks hanging on every note. But we have shared our mutual respect for decades and it was great to sit down and play to each other and the folks gathered for the picnic.

Steve is a great guitarist because he listens first and then finds how to add to the song, and we both have a great sense of dynamics. He also recognizes that I can set up the song, the chords and sing the tune and he doesn’t have to worry about fronting the music. I have great confidence that he will pick up the changes, even on tunes he’s never played before. We did this today. Our antennae were up for this set this afternoon and we did played some fine music. Steve enjoys the challenge of my diverse material, from country to blues to folk to original songs, stuff that is new to his ears, I’m sure. I get to enjoy his response to my music. Simpatico. Many wonderful moments between us. And, like myself, he would rather play than socialize. It’s how we communicate best. We nailed Lessons from Pete, Barrelhouse, Louise, among others today.

Several folks complimented our exchanges, the material and obvious respect for each other. All I could say was, “That was a whole lot of fun.” Steve loved the tunes and the challenges and the interaction. This was a good as it gets at this level.