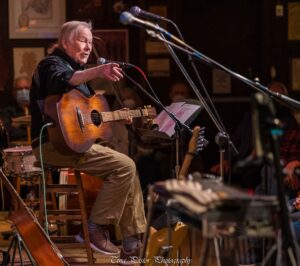 I am the perennial opening act for Jack Murray’s annual Hankathon at Godfrey’s on New Year’s Day at Godfrey’s. I usually do three songs and hand things off to Jack and his band. And, usually, all the good Hank songs are snapped up by the band. Well, tonight, I decided to start off with Your Cheatin’ Heart and follow with some cheatin’ songs, desparate for a theme. It actually was a good idea.

Your Cheatin’ Heart was released after Hank died and became a hit, covered by none other than Ray Charles (’62) and known as “the song – for all intents and purposes – defines country music.” It’s short and sweet and I did a manageable job on it, commenting afterward of how studying Hank’s vocals and slurs made his music very emotional. It was nice to finally sing one of his songs at this event.

I followed with Paul Siebel’s Honest Sam, a thinly veiled tune about megalomaniacs like Donald Trump, again about cheatin’. This one dealt with card games. I added a comment on Mara Lago and threw me off on the following line (“sails his ships out on the sea”) but I landed on my feet and finished the song. (No such thing as a perfect set…)

I followed with a great cheatin’ song, She Left Me For Jesus, a rather raucous country tune I picked up from my friend Reid Tre. It’s pretty audacious with phrases like: “if I ever find Jesus, I’m kicking his ass” and “I bet he’s a commie, or probably even a Jew” and “why, the last time we made love, she called out his name.” It was cool to lay this on a full house at Godfrey’s and it was well received. An aggressive and somewhat controversial selection on my part, but it was a good choice. 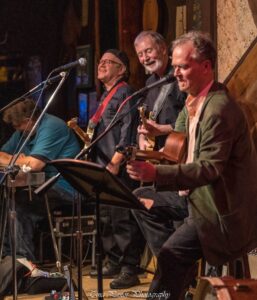 I decided to do a fourth song, and end on a positive note, with Jerry Jeff’s My Old Man, a gorgeous song, a simple song (G Dm D G) that waxes sentimental about a rambling fiddle play, a dancing woman and a legacy of good songs. I managed to do the song with minimal help from the lyrics in front of me (oh, how I hate to do that….) and it landed quite nicely.

I introduced my friend Jack and his band The Blue Tarp Wranglers, talking a little about wrangling blue tarps in difficult situations (an apropos description of what Jack has to deal with), and quickly got of stage. My kind of gig.

Jack followed with two sets of classic country, with plenty of harp, steel and guitar leads to fill a warehouse (drives me up a wall, sometimes) and the sold-out audience loved it all. Jack’s quite a mensch in putting this evening together and see him pull it off in style. I’m glad to be able to open for this event every year. 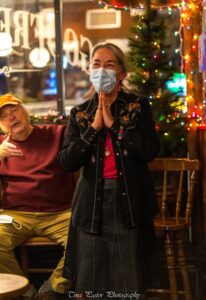