This was the second Wilmington Park gig of the summer for me so I had some peace of mind as to what to expect. Heading out with time to spare, I was surprised when, on the Blue Route south, my GPS’s estimate of arrival time jumped 45 minutes to exactly 11:00 am, my start time. Sure enough, as I got to about 22 miles away, things began to crawl. I called ahead to Sid, my trusted liaison, to let him know I’d be there “nick ‘o time”. Sure enough, I pulled up to the park exactly at 11 am. 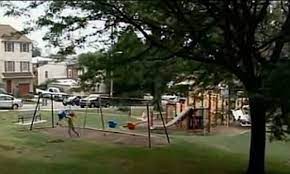 Sid had things ready for me to plug in, under a nice tree, while a group of kids and counsellors were gathering not far away. As I was ready to begin, that group got up and walked away towards a different part of the park, leaving me with a dad and his two kids. (They were at the last gig, too. Cool.)

So, I set in with the four of us. Eventually, another group moved into the park and I invited them over but only five or so girls came over from that group. (Apparently, the rest of the group was being disciplined. Sheesh).

It was a scattered beginning to the gig for me, so I opened up the bag, invited the girls to grab and instrument and play. Eventually, I jettisoned the mike and amp and simple worked with the kids in front of me. One particular girl was all in, and was a delight to work with. As I did Jelly in the Dish, she picked up on the idea, and started making it about being on the beach. It was a pretty creative avenue, so we took off on that, making a day on the beach sounds. I could use this down the line.

Things were scattered on my part, and as we neared the end of the hour, a few kids headed off to the water spray part of the park, and I wrapped things up early, not with a bang but a whimper. Sid and I packed our stuff up, as Sid smoked the joint I found next to my amp.

The travel home was quick and direct, but I felt that I hadn’t done my best on this one. I’ll feel better when the pay drops in my bank account mid-month.