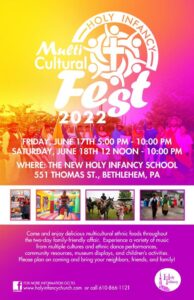 It’s been several years since I’ve last played for the Holy Infancy parish and I was pleased to return this year. I’ve been playing at the school for 14 years, many times in the old school down on 4th Street, a block from home. They’ve moved up the hill to a very nice facility and they asked me to play inside in the cafeteria. (There was lots of activity out in the lots around the school and church. I was fine with having a small footprint.

It was a hot day and I was fortunate to play in the air-conditioning. I had a 7:30 – 8:30 set, a little late for some families, but there were a few friendly faces from my assemblies at the old school, and they made me feel quite welcome. A few teenage girls were gathering so I invited them to move closer. They started asking me for Bear Hunt, Cat Came Back and others. I realized these teens were once in first and second grade; they actually knew the songs better than I did. Pretty cool.

There were a good number of young families with little kids, so I broke open my small bag of instruments to share and we had a good time dancing and running around the stage. I eventually got out a bag of scarves and away we went. Toddlers, teens and a few adults having some food and drink in the back. I wrapped things up after about 45 minutes.

The principal thanked me, gave me a check (a first for me) and we figured times were right for a return assembly in the fall. Good Neighbors.