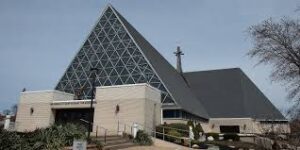 We headed down the Turnpike to Levittown for a Wednesday morning assemble, near Bristol, Pa, hometown of my folks. I got there early, introduced myself to the principal (dressed in full beard as Joel Embiid!!) and set up in the gym. As the band arrived, we had a chance to go over The Snippets – the short medley of regional R&R styles, and that proved to be beneficial.

I really didn’t review the show like I should have, relying on muscle memory, and, for the most part, I did okay. I did misplace the Elvis section, putting the Do Wop first. Our Peanut Butter section is a riot with four kids coming up, giving them red shades, and the crowd loving it, including the older kids (7th / 8th graders) responding to one of their own on stage.

We finished with All Around The Kitchen with the entire gym up and dancing. I always ask several teachers to come up at the very end, and one teacher (who I noticed dancing in the back during the show) came up and demonstrated The Bristol Stomp (only three miles away). She nailed it!!!.

The principal lauded the show after the kids left, claiming that he had played drums in bands a long time ago. The Stomp teacher came back in and said we were the best assembly ever. It’s nice to hear that, and important for the rest of the band to hear, too. RockRoots is pretty special.