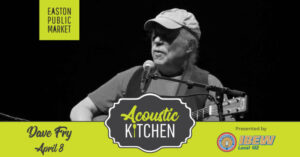 I had trepidations about my two-hour set at the Easton Public Market, partly because of the horrendous parking situation in Easton these days and partly because of my rusty performance chops. Pleasantly, it turned out well on both counts.

The Friday night traffic made for a later arrival than I had hoped, but the friendly market manager, Erin Grins, made me feel welcome, and as I unloaded, parked and started to set up, I felt okay. My good friend Joe Janci had also showed up and made me settle in quickly. Thank goodness for the available sound system, though finding all of the ‘on’ switches made for some concern. Sheesh.

There were only a few folks gathered in the eating area, but I singled out a young boy with his mom and dad who was curious about my sound check, so I invited him up to test the mike. It was a good way to start, and, curiously, it caught the attention of the market manager who mentioned it after the gig.

I started with Blue Mule and noted that my flat pick was off a string or two to begin with, a sign of neglect over these last few weeks. But, the lyrics were sharp. My playing improved over the course of the night, with a few lyric blips thrown in, but, remarkably, my mitts didn’t suffer fatigue like before. A good sign.

A friendly trio moved up front early on. They were quite enthusiastic but the husband started asking for the standard standards. I said tonight’s theme was “Songs I Know” and started Mr. Bojangles, which defused the whole situation. When I mentioned it was “Middle Child Day”, they all pointed at each other – the husband, the wife and the mom. It was pretty funny. We had a good connection and made the early set interesting.

I had taken the time that afternoon to print out a new list of songs, and it felt good to have that to fall back on during the night. As usual, the ones I wanted to work on fell by the wayside. It was nice to be in a place where the crowd was friendly, though not hanging on every word, and the applause was gratifying and the tips generous.

Chatting with Erin Grins afterwards, I found that we had a bit in common. She and her husband are stilt-walkers for festivals and also teach circus skills in schools. She mentioned my early interaction with the young boy at sound check, and realized that I knew how to communicate with an audience. She appreciated my interaction through out the night, as well.

I came out of the gig with some positive energy, but isn’t that what creating art is supposed to do? And I got a check, too.