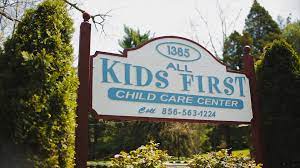 This was going to be a challenge for RockRoots. First of all, Vineland is over two hours from the Lehigh Valley, with three vehicles with musicians at the wheel. Second, we had two shows for 120 three/four year-olds and then another for 80 four/five year-olds. These ages present some major situations for me and the band.

I left at 6:45 am for the 10 and 11 am shows. I know a fairly good (non-Philly) route and got there in plenty of time. I’ve played this school a couple of years ago with my solo folk show, so I felt at home. It’s a well-run and friendly group of teachers, with Miss Carole, the founder and principal of this private pre-school. Class rooms are spread throughout a campus of small buildings. We were in the main building, carpeted and filled with great art. 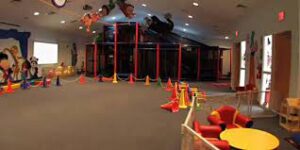 A wonderful and comfortable assembly space.

I set up the PA and waited for the band. Kevin called in to let me know when he’d get there and arrived w/ twenty minutes. Not a problem for us. Nick and Wayne arrived with 4 minutes to spare, and I said to Nick that a call would have been nice. (grrr…) Still, we were ready to go at 10 after, and the little kids and their teachers started coming in.

Three and four year-olds sat in awe of the band, some cupping their ears – only a couple, but understood. I don’t believe many had ever seen such a thing. That’s powerful stuff. 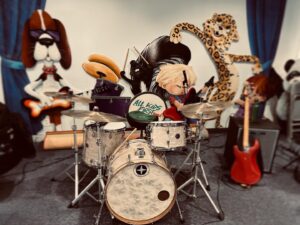 I started by introducing the players and their instruments, a good and friendly way to ease our way into the show, and give them some things to concentrate on and some knowledge. Then, we did Rock and Roll Music as a band. The teachers were now at ease and ready to have fun.

We rolled through our simpled-down set: African rhythm, Irish mandolin tunes, Fishin’ Blues, Charlie Stone (the vocal trombone got their attention), Mojo and Battle of New Orleans. We’ve been putting in a kids’ song at this point and today we did We Gave Names. Again, simple song for the band (they get to have some fun while I’m dealing with the audience interaction and educational aspects.

I cut out a lot of the historical rap, a few medleys, cut to My Girl (with audience singing – mostly the teachers) and headed for the finale – today it was All Around the Kitchen. Get ’em up and dancing. It worked like a charm. Amazing, actually. The kids were all up and moving, teachers dancing. After a few examples (including the new Car Dealership dance), I bring selected kids (I ask for three and get six… and that’s okay) and have them demonstrate their moves, always surprising and delightful for the band and the teachers. I then do the last dance by selecting a teacher (I always have my eye on the most likely culprit), who, in turn, gets to pick two other teachers. That always amps up the energy immensely and the teachers (especially in this age group) always knock it out of the park. The first show featured the two male teachers, and I remarked that they were Chippendales. That got a chuckle out of the teachers.

We finished up the two shows, got some great thankyous from teachers and Miss Carole, who said she’d like us back next year.

Why does it work, even for such a novel audience?

The long day and intensity of running two professional and entertaining show, five-plus hours of Jersey driving took its toll and I feel it, even a day later. Gettin’ old, but still gettin’ better at the job I love.