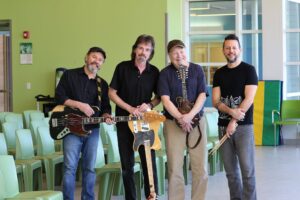 The RockRoots shows are far and few between these days. As Kevin pointed out on Tuesday, we used to do close to 20 shows a month, often 3 or 4 times a week. This was only the second one this fall. It was a good one, though.

This was a special needs school in nearby Warren County, NJ. There are usually few students and more teachers per student. Today there was roughly 20 kids (mostly boys) from ages 10 to 17, and they were an excellant audience. I was more comfortable with the show’s format now that I’ve done it a couple times since the pandemic, and it rolled well and the band played well.

At the end, I decided to open the floor up for questions, and we were able to talk about how each of us started out playing music at their age, how we play regularly with other bands, that we don’t necessarily rehearse with this band since we’ve been doing it so long. One kid asked if we started playing in order to get girls. That brought a big chuckle from everyone in the gym.

The show was a hit and several teachers and the custodian commented that it was the best assembly they had seen in years. That’s always nice to hear, and something we don’t always get to hear before we leave the school. A good day.