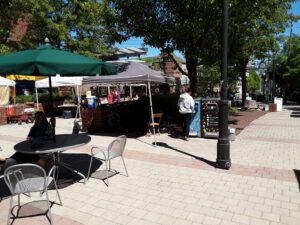 This was my second Campus Square (old name) Farmers’ Market of the season, a bonus from the single shots of past years and the swing-and-miss of last year. I’m glad Deb gave me an extra one, since I’m a local guy living a block away. The day started out cloudy but eventually turned to sun.

We were under new Covid protocols since there were 150 new cases of the virus on campus in the last two weeks. I masked up and set up for a 11:15 start for a two hour set. Students were milling around so there was at least some movement, unlike the June gig. Crazy Joe and his peanut butter got his tune early on.

There were a bunch of students sitting at a few tables up front and I started some chatter, refering to days at Lehigh as an Arts-Engineer, which brought a rise from the kids. There were a few in the group. About 20 minutes in, my friend Amy Forsyth showed up, and I found out that these were her students in design. That explained why they were hanging out with sketch pads. They stuck around doodling away, and it was good to have Amy’s ears in the audience.

I played well and, as usual, the vendors appreciated the sound. I did take the mask off to sing. A friend Lisa A. dropped by towards the end, a big fan of July, so I did it up for her, gave her the CD compilation that it was on. I makes a difference to have friendly ears in the crowd.

I actually got a few $1 tips from the students, though I did shame the art students into donating. (Amy insisted) They simply do not make the connection of why the tip mandolin case is there. One student said that they never carry money with them – they have cards now But, I still find that hard to believe. Still, I was glad to make it out with $30 or so.

A good day for play.