The ole gang gets together annually on the Friday after Thanksgiving for the last 5 or 6 years. This year we had a Musikfest gig in August so we actually have quite a bit of material worked up. Kris Kehr has settled in on bass and the other band members have accepted his dedication and work on the material. Thanks to our regular gigs, Hub is playing piano more, Jeff working on drums and Chris getting back to his steel guitar work. We don’t show as much rust as we once did. Reid remains off in New England but is playing all the time so I have little worry about his performance chops. Peggy is singing regularly, too. Still, the band is not tight like it used to be. And that’s okay, I guess.

We had several practices for this and came up with new material to perform, trying to still explore our collective creativity as a band, as well as simply enjoy each other’s company. Our rehearsals are actually filled with wise cracks and friendly jibes. We enjoy our long friendships.

Reid came into town early so we gathered at 1 pm on Friday and ran through the two sets. Peggy and I got our signals crossed and she came after we packed it up around 4 pm. We got together to straighten out the sound check at 7 for the 8 pm show. We could have used the time earlier.

The first set went well but I was working up a sweat. I was feeling a little winded after the long rehearsal in the afternoon. I wasn’t 100% and I don’t think the band was either. I was disappointed in having half a house as well and didn’t feel the energy of the audience as before. We didn’t remember our arrangements/leads as much. I also think too much.

I totally blew Peggy’s Angel tune by starting it off as a waltz. Troopers that she and the band are, we managed to finish the song while not totally owning it. It was novel and I challenged the audience to figure out what we did wrong. As usual, we cover our asses with style but I know there is no pride in screwing it up for ourselves. Chuck E’s in Love also suffered from not rehearsing it full band in the afternoon. I feel badly for Peggy’s sake. I even screwed up Lessons from Pete and should have kept Bojangles tighter, nothing noticeable but to me and the band. It was exhausting.

We regrouped for the second set.

There was less anxiety for me in the second set. There were fewer powerhouse songs and I think we were more comfortable with the house and the situation. Hub took a chance with his solo Beatles’ song and did fine (though never to his satisfaction). We were able to hit the critical ending to Don’t Call Me Early (yay!) and 24 Robbers was pretty good. I was disappointed with the set of mandolin Jigs, in that the band wasn’t quite familiar with the subtle chord changes to really bring it home, but I played it well and Jeff drove the tune on drums. It didn’t rise to the power of the old days. Rodeo Rider reestablished some credibility and Jeff’s set as front man is always welcome. The encore Soul Shake was a straight ahead rocker and both Peggy and Reid really delivered on a song we had briefly run through before the show. Folks loved the show.

I had a chance to talk with Hub’s wife Donna at the counter as we packed up and said our goodbyes for another year. It was good to hear from her and the audience’s point of view. She said that the crowd picks up on different aspects (outside of our myopic view) that make for a good show. The humor and side-talk is still pretty funny. We play well and have a powerful array of instruments, arrangements, talents and a very diverse repertoire. We obviously enjoy each other’s company and the joy of playing together. Donna enforced that last point: people come to see us play together. It is, after all, play. 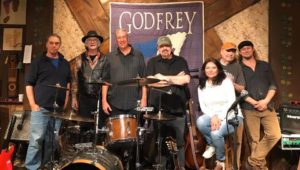 I found myself wasted after the show and into the next day. I invest heavily in pulling off a Steppin’ Out! show since I am the nominal leader. It’s hard for me to perform without the confidence that I maintain when it’s just a solo, duo or trio – too many moving parts, leads, endings, etc. in a large band like this, especially with the few gigs and rehearsals that we do. But, I remain tremendously proud of this group of friends and professional musicians. We are still a great band.