This was a pretty interesting gig, one that turned out quite different from what I expected. Phoebe is retirement facility in West Allentown and has been around long time, with wonderful stone buildings and nice grounds with spectacular flowers. In fact, I was to play on the small band shell (a real old-time band shell) but the weather was too brisk for the residents to go outside.

The event was supposed to be a food truck gathering with folks checkin’ out the food while listening to my music on the lawn. Nope, and I feel badly for the vendors. I’m sure they took it in the wallet.

Thanks to FB, a couple of friends came out and, of course, I got them on stage. I asked my good friend John Christie (and Susan) if he wanted to sit in, spur of the moment. I was glad he did. Handman Bruce Gaston (and Betsy) said he’d show up, too.

So, it turns out I’d be doing a long set (originally 2 hours, outdoors), but in the large recreation/meeting room in the main building. Michele Kirby Butch, my contact for the gig, had a cart to get our stuff in painlessly. We set up the pa and got started, John and myself on our Martins. As usual, I abused poor John with a whole different set of songs. He is fearless.

I have played audiences like this but haven’t recently. My repertoire is somewhat lacking with the sing-alongs that other folks who do this regularly. These folks simply love to sing along, and it’s no mystery why. But I try to engage them with kids songs, banter, stories, some country songs. It seems to work for most of the who accept the situation. Frankly, I love the older women who display a sense of humor, sing along with The Cat Came Back; they are all there, in spite of the wheel chairs.  I play to them.

My friend Bruce Gaston is one of my favorite stage mates, and we’ve been doing this for decades. Bruce is a manualist; he plays his hands. When I see him in the audience, I know I’ve got a real treat for my audience. I told this to Bruce today – that I have the best seat in the house – I get to watch the audience as they react to this bizarre talent.  Today was no different. I love him.

John and I churned through a mess of country, early rock and roll, kids’ stuff as the staff passed out shakers, maracas, tambourines, etc. That made a big difference, as expected. Older folks connect (as do toddlers) with a physical device in their hands, whether they are familiar with the type of song that I’m playing. It gave John and me some room to move around stylistically. (Sorry, John, for puttin’ you through some weird 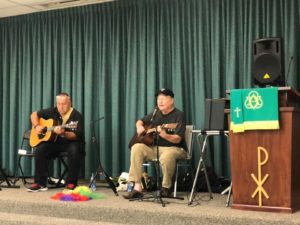 Though I was booked for a two-hour set, I brought it in at an hour and a half. Michele agreed. It was a good, entertaining afternoon for us all. It was a stretch for Michele to book a folk act, but it seemed to work. Bruce and John and Betsy and Susan got to meet each other, hang out and swap gig stories, etc.

While they were chatting I found out a deep family/Godfrey’s connection with Michele. Her dad, Ed Kirby was around when Godfrey’s was in its primordial ooze. Ed found a source for all the barn wood that is the wainscoting, front and side window ‘fences’. I was able to tell Michele and her son how far Ed Kirby and Godfrey’s go back and that his presence is still alive in this world and part of the actual sound of this club. That’s pretty, no, that’s very, very cool.

Anyway, it was a lot of physical work, a challenging audience for not a whole lot of pay. but, as always, the joy is in the performing and the friendship and deep connections that rise to the surface.

Check in the mail next Friday but beats working.