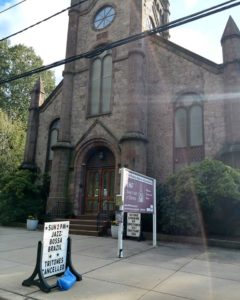 I was invited by Amy Duckett Wagner to perform with several other musicians at a new venue in Ewing, NJ on Saturday night. It was a benefit concert for Children’s Legal Aid (ALDEA) held at the 1867 Sanctuary Arts and Culture Center, a renovated church space dedicated to performance. After my sound check, I had time to chat with Bob Kull, one of the managers of the venue and was impressed with how far they’ve come in three years. The group has worked with NJ State authorities as well as local governments to convert the church into a viable space. Bob also said that it has become a favorite spot for jazz, classical and choral music – he’s tapped into support from some surprising sources.

The concert featured five acts; I only knew Amy and Carolanne Solobello, a Godfrey’s performer with several groups in the past. Acoustic player Chris Chadwick and duo Alix Paul and Jeff Fadden were also on the bill. 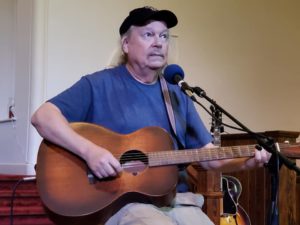 Amy asked me to kick off the concert, since I came from the farthest away, and I welcomed the opportunity to introduce myself to this new audience. I was told to do twenty minutes so I rolled through Don’t Call Me Early, Vegetable Song, Giant and Lessons from Pete. It was good set of music with my engaging chatter between songs. 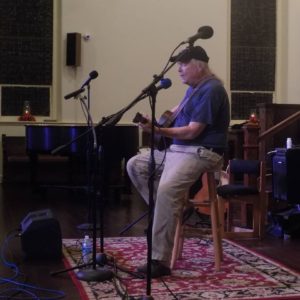 Amy followed with a much longer set (it was her gig) and then Carolanne did a wonderful set. I was disappointed that Amy didn’t adhere to the twenty minute criteria which created a much longer night for the audience and the other performers. We took an intermission, and as I gathered my guitar to hit the road for the hour and a half drive home (radio show in the morning), I thanked Carolanne for her set and ran into a fellow who had gone to Godfrey’s while he was a grad student at Lehigh. I sold a CD to Bob Kull, which was a nice gesture and drove back to Bethlehem.

The space is rather large and works well for instrumental and choral works but lyrical pieces seem to suffer a bit from the openness of the hall. Good though…

I particularly enjoy playing for new folk audiences, seeing other performers in action and getting the opportunity to surprise folks with my “show”, what ever that is. I also appreciated that this venue is serving the needs of it’s community, especially with non-folk audiences. I hope to return again.