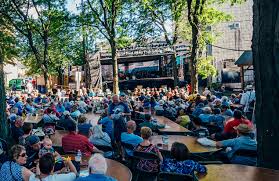 I was gifted the opening set at Liederplatz for Musikfest’s Opening Night (not the preview night…. that’s something else….). I was pleased to get the spot and also open up for my friend Dina Hall’s latest band. I decided to do the stripped down Dave and Kris Duo. It turned out to be a good play.

Liederplatz is in the Sun Inn Courtyard and one of the best stages I’ve played on. My friends Terry and Dave do great sound and the courtyard is a wonderful acoustic/social space. I think it’s the best stage at Musikfest.

I landed early for the 5:30 set so I could put some space between Das Awkscht Fest... and change some much needed strings. (Problems with the guitars this week…) It was a good thing to do and gave me some time to decompress for this gig, catch up with some good friends, take off my shoes and get centered. I knew I was flirting with danger by changing strings before this gig. Plus and minus situation.

Oh, my set and Dina’s set are going to be broadcast on Service Electric Cable TV. Well, surprise, surprise! I do recall trying to animate for the cable audience….. Whatever. I hope to hear about it down the line. 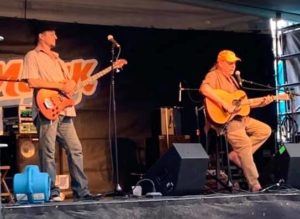 Surprisingly, there were a bunch of familiar and friendly faces in the audience and I felt ready (well, a little beat) to deal with this situation : the crowd, my preparation, the sound check, the heat, Kris as the band, hometown, new strings and more. It turns out that I was really pleased with remembering and delivering lyrics (it takes more work these days), playing strong and clean acoustic guitar sound/rhythm and doing a professional set of folk music.

I ended up doing a couple of kids tunes since there were with several families in the audience. I had to adapt, of course. We Gave Names to the Animals and Giants would have to suffice today. No Cat Came Back, though I should have. 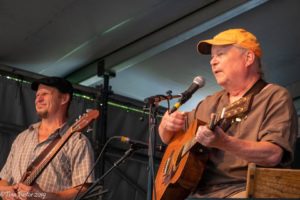 Kris and I were solid and Kris played some nice leads on Giant and Lessons that caught people’s ear and helped change the sound of the set. I had some tuning pauses (again, never change strings before a gig), but was able to converse with the audience comfortably. Apparently my guitar sounded great out front. I thought I sang well. (that’s why good sound makes a difference.)

I actually sold several CDs after the show. Glory Be!

I am beat after two challenging sets today. Tomorrow is a kids show at Das Awkscht Fest at 1 pm.  Low profile for Saturday and back on the griddle on Sunday with Steppin’ Out!