This remains one of my favorite gigs of the summer. Camp Happiness is a special needs camp, kids with behavioral as opposed to physical issues, so, they seem to me to be fairly functional and fun-loving kids. So that’s how I roll.

I’ve been doing this camp for over 10 years and the campers, staff and counselors have their favorites that they know and actively use during the camps. When I came in the doors of the school today, I was greeted with shouts of “Hey, Dave Fry”, “There’s Dave Fry!” etc. and, since I had my shades on, I looked the part for once. This, of course, never happens anywhere else so I smiled to myself. Cool. Even the counselors were glad to see me and made me feel really welcome.

I had left 4th St. at 5 am, partly because I’m waking up early these days, and I never know what morning traffic I might hit. Today was a breeze getting there so I had time to meditate  before I headed to the school.

I set up in the wonderfully air-conditioned auditorium and the kids and staff sat on the rug area in front of me. Lots of familiar faces. I thanked them for having me back and told them off the bat that this was one of favorite gigs, that their counselors are the best I’ve seen and that this gig gives me the chance to try new things that can use at schools and festivals later on. 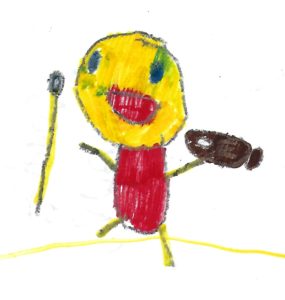 I started with I Like Peanut Butter but did it a cappela with four girls and four boys up with me with matching red shades. It was a good way to start, singing as a group, no guitar, movement and solos by the kids. I also did Avner’s crowd sound direction with three separate sections. It was another good way to work the crowd away from the microphone, in the space.

Then, I picked up the guitar ten minutes in, with Cat Came Back, a song that is a camp favorite. We worked on paw movements, singing like a cat, the counselors doing opera and the kids doing rock. The kids really surprised me with that one; I definitely heard some punk vocals during that. It was a riot and unexpected. When I gamble, I’m rarely disappointed.

Bear Hunt is another one that they love. This time, as I was headed for the finish, one of the counselors slipped on a bear mask and ‘hid’ behind my PA speaker. When we hit the end, the woman jumped out as the bear to everyone’s delight. They were prepared for me, and it was delightful.

Giant was next and one male counselor had asked for it before the gig so I got him and two campers to come up and play Thunder Tube. Again, these counselors commit to having fun along with their kids and it makes all the difference. Big fun.

I had success with Jimalong Josie this week at Summer Slide so I’ve substituted it for my other dance pieces All Around the Kitchen and Keep A’Knockin’. I passed out the bag of instruments and my scarves and the counselors helped distribute everything, so things were not as chaotic as I had expected. I did some of my scarf exploration with them, and got everyone up to dance. Jimalong affords me the opportunity to guide the kids with hopping, twisting, twirling, etc. and then with the current dances (Floss, Hype, etc.). Since the camp is divided into groups (Tigers, Hurricanes, Dolphins, Monkeys, etc.) I then had the kids make up dances for each tribe. The whole place was rocking with kids, staff and counselors shakin’ that thang. 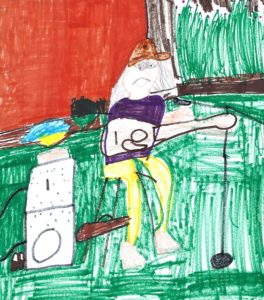 I decided to do a reflection at the end, and the kids came up with singing, dancing, wearing shades, etc. and then I opened it up to the counselors. That kind of took them by surprise, but I said that there were things I did that they can use. They came up with the surprise bear, Avner’s applause conductor, the movement and dance, having fun (no small thing), singing all together, etc. This discussion also gives me a chance to explain what I do and what I get out of it personally, in the moment.  Maureen, the head of the camp, who has booked me these many times over the years, said she liked everything.

As I packed up, I got one of the groups to put things back in the bag, and this also works well as a way to interact in close quarters with the kids, exchange small talk. I’m not just some performer up on the stage.

As I headed out, one of the counselors thanked me and told me I was great. That was totally unexpected coming from college-age counselor, and helped me realize that these folks understand what I’m trying to do with the kids, and have a great time along with the campers. That’s no small thing either.

The drive back was a bitch. Traffic on I-95 was thick and every twenty minutes featured a torrential downpour all the way home. But I had my tunes and leftist podcasts and a general high from my annual visit to Camp Happiness. Funny thing about that.