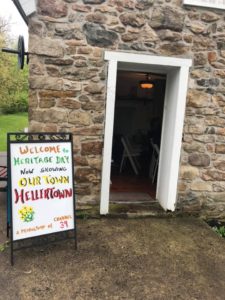 It was Heritage Day in Hellertown, just over South Mountain from Bethlehem. A fine lady I know from the local farmers’ market suggested I get in touch with the folks at the Grist Mill’s historical society, and, it appears she help put some money towards my fee. It was one of those “we don’t have much money” gigs but I stuck to my guns, gave them a discount and they found some backers.

It was a small affair with hot dog vendors and few crafts, the local VFW, Boy Scouts and a home-brewer. There was a small tent set up for the music, and when I inquired about the sound system, they brought out a small, powered speaker. I brought in a few mikes and stands. An older woman was there for the 10 am set, playing children’s songs, checking her list and rolling through it.

I was to play two sets until 12:45, and only a few folks (including friends Hub and John Christie) settled in for the music. It’s been weeks since I’ve played, so I was a little rough to start off, and the humidity did a number on my strings. Still, it was great to be back in the saddle. I mixed up some adult stuff, and as a couple of scouts came by, I had my fodder for the rest of the set. 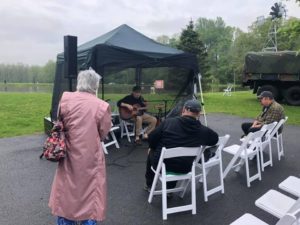 One of the boys started doing “The Floss” so I asked him up. I did Jelly in the Dish and told him it was a fifteen minute song. He said, “No problem.” and away we went. He younger brother came up and started doing some freelance moves, and the both of them provided some great energy to the affair. The vendors and festival staff loved it.

I ran into a friend who said he’s joined the cancer club with me, just starting up chemo. He was helping the kids fishing in the pond. We talked about how fishing is in our families, and how I was raised by my uncles on Long Beach Island to appreciate the fact that it’s not the fish, it’s the fishing. I was told that it was the first day of baseball, otherwise there would have been lots more kids on the pond. Modern family life, I guess. 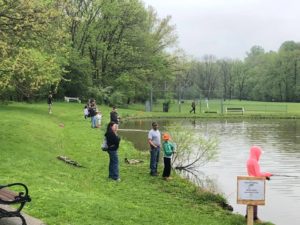 Hub set up nearby to do some of his “fishing”, painting away with the water and trees. He came by to paint the mill, and was surprised to see all the activity. Undaunted, he made use of the nice day to spend time creatively. So did I.