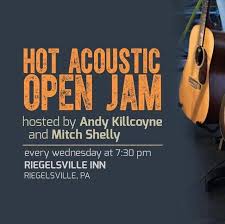 I had to get out of the house and put myself in front of some people so I headed down to the Riegelsville Jam, run by Nadine (my good friend), Andy and Mitch. It’s a very warm community of players and listeners and it’s a great place to try out some new material. That’s what I did tonight.

There were an assortment of fine players tonight and I got to follow Dina Hall’s set. It’s always a challenge to play here and I took some chances.  Folks were listening.

I start out with Knockin’ on Heaven’s Door, one I’ve be honing over the last month. It’s simple but the trick is not to beat it to death. Mitch dialed it in on bass and Andy didn’t quite figure out the intro, but, if I played it strong, I knew we could pull it off. Nice dynamics, great lead by both Andy and Mitch and folks sang along. It worked well.

I attempted Part of the Union with less success. I should know that the capo is your friend. I shucked it tonight and, combined with a dry voice, lower key and not having the lyrics down, I wobbled my way through it. It was a stern lesson in the difference between my kitchen and the stage. Somehow, it rolled into shape at the end. Not satisfied. But a fellow came up afterwards and loved that I did a Strawbs tune. 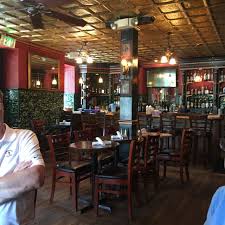 I finished with What About the Bond from Bruce Cockburn. I set it up strongly and it turned into an  interesting trip. What makes this song work is the restraint necessary to set up the reggae grove and give room for the lyrics (that actually mean something to me). Mitch and Andy gave me lots of space, like the pros that they are. I shortened the song by doing two verses before doing the chorus. It gave us more time to explore the music when it came around to Andy’s lead. I am glad that I can give out cues to the trio in transit. Andy and Mitch have their antennae up when I play with them and there’s a lot of trust going on. That’s why I love going to this jam.

I got some nice compliments afterward, though I was not satisfied with my set. Apparently I am able to count on my performance skills enough to negate what I consider to be obvious flubs (word, words, vocal key….). I was able to get folks to sing along and create a creative space for my fellow musicians. We were in the moment and that’s what is important, I guess.

It was pretty humorous that a young player came up and thanked me for “What About the Bomb“. That pretty much took me back to ground zero. Now I have that in my mind and it will prove to be great fodder for future introductions of the song.

There is great community happening here. I’m glad to be an occasional part of it.