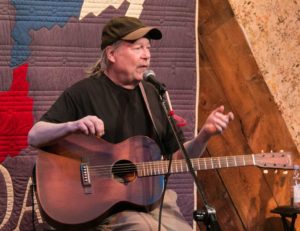 I have the opportunity to perform in front of a Godfrey’s listening audience every once in a while. Tonight, my friends Jenn McCracken and Mike Dugan (Cheek2Cheek) invited me to do a small set for a homeless benefit at the end of the first set. I started with Santa Assassin, a nifty little blues that gets folks attention. A good opener. I followed with Lessons from Pete to maintain some songwriting cred. I invited Mike up to play on Zat You, Santa Claus cold – no problem. He nailed it, I added vocal trombone, inviting the audience to join in (which they did in spades!). It was a riot. I finished with Pete’s False From True, a two-chord blues wonder, which gave Mike lots of space to shine. This was a keeper, since he plays on this tune on Troubadour. All in all, it was a particularly satisfying mini-set for the home crowd. 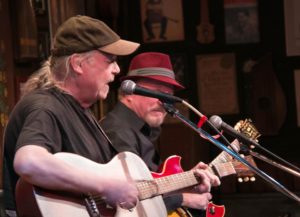 I actually sold some CDs, including a couple of Peanut Butters, thanks to the lasting power of The Cat Came Back. The lady who bought them will give them to her now twenty-something kids as stocking stuffers. The legacy lives on.